Caps rally with his second homer of night 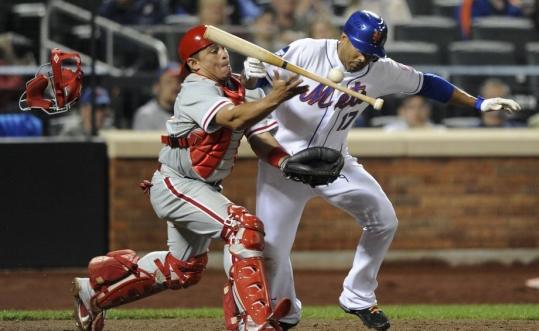 Chase Utley led off the 11th inning with his second homer of the game, moments after right fielder Jayson Werth saved Philadelphia with a diving catch, and the Phillies beat the host New York Mets, 5-4, last night.

Utley's third homer in two nights, which nestled into the right-field corner at spacious Citi Field, came on the second pitch from Bobby Parnell (2-1), handing the hard-throwing rookie his first big league loss.

Philadelphia rallied from a 4-1 deficit in the seventh and dealt the Mets their sixth loss this season after they led by at least three runs.

Chan Ho Park (2-1) worked two scoreless innings for the win - with help from Werth. Subbing for injured closer Brad Lidge, Ryan Madson got three quick outs for his third save.

Tigers 2, White Sox 1 - Detroit's Justin Verlander pitched a six-hitter for his first victory ever at US Cellular Field in Chicago.

Verlander (7-2) struck out nine and walked one in his second complete game this year. He has a 7-0 record and league-low 1.10 ERA since April 27. The seven-decision winning streak matched his career best of 2006, when he helped Detroit reach the World Series.

It is the Rockies' longest streak since they won 11 in a row in September 2007. That run helped propel them to the playoffs and eventually the World Series before being swept by the Red Sox.

Peña hit a solo homer in the third inning and Aybar added a two-run shot off Lackey (1-2) for a 9-5 lead in the fifth. Aybar also had an RBI single during Tampa Bay's five-run second against the Angels starter, who had won nine of 10 previous decisions against Tampa Bay.

Astros 2, Cubs 1 - Geoff Blum singled in the winning run with the bases loaded in the bottom of the ninth to lift Houston.

The Cubs wasted a dominant start from Carlos Zambrano, who allowed a run on three hits through eight innings.

Reds 4, Nationals 2 - Pinch-hitter Jonny Gomes hit a tiebreaking RBI double with two out in the 12th and Cincinnati won after host Washington rallied in the ninth following a long rain delay.

Giants 6, Diamondbacks 4 - Bengie Molina homered and drove in three runs, Brian Wilson struck out the side for his seventh straight save, and San Francisco defeated host Arizona.

The Blue Jays-Rangers game was postponed because of rain. It will be made up as part of a doubleheader Sept. 1.