Many in Chelsea, Lawrence vow allegiance to New York 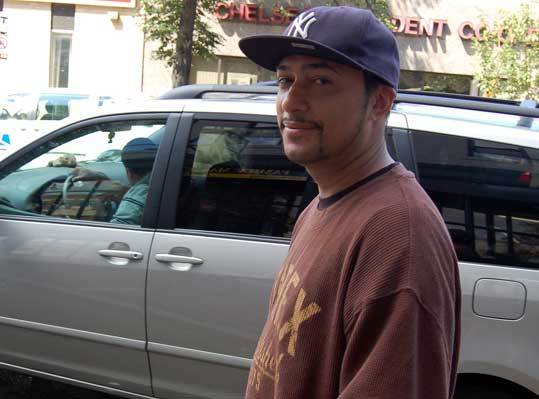 "Yeah, there are a lot of Yankee fans here," said Jiovanny Duran, a 30- year-old Chelsea resident who grew up in the Bronx. "Every time you turn around you see a Yankees hat." (Russell Contreras/Globe Staff)
By Russell Contreras Globe Staff / September 25, 2008
Text size – +

The store window is stocked with New York Yankees caps and Al Pacino "Scarface" shirts. Across the street, Yankees fans complain that there will be no October playoff run for the boys in pinstripes. A moment later, a woman in a Yankees jersey passes by pushing a stroller.

You might expect to find this scene in the Bronx or Manhattan's Washington Heights. But this was a recent Thursday afternoon in Chelsea - just 7 miles from Fenway Park. And a similar scene can be found in Lawrence almost every day. With the final Red Sox-Yankees series of the season at Fenway this weekend, Yankees caps, jerseys, and sweatshirts will be worn proudly in Chelsea and Lawrence - two mini-Yankees enclaves in the middle of Red Sox Nation.

Compared with most Massachusetts communities, Chelsea and Lawrence probably have the largest numbers of Yankees fans, or, at least, the most visible ones. No one knows just how many there are, but the sports stores in both cities report steady sales of Yankees gear and residents say it seems as if Yanks are everywhere.

"Every time you turn around, you see a Yankees hat," said Jiovanny Duran, a 30-year-old Chelsea resident who grew up in the Bronx next to Yankee Stadium.

The reason is simple, so the theory goes. Both Chelsea and Lawrence have large Latino populations - about half of Chelsea's 35,000 residents are Latino and so are more than 70 percent of Lawrence's 71,000 people. And for many of those Latino families, many of whom hail from Puerto Rico, the Dominican Republic, or Central America, their first stop in the continental United States was New York City.

"That's where they developed their loyalties," said Lawrence schools Superintendent Wilfredo T. Laboy, who grew up in New York and is a lifelong Yankees follower. "You can see it in our schools. Half of the students are Yankees fans. New York is where many of them learned what it is to be an American, so it's only natural that they stick with their first team."

In Lawrence and Chelsea, one will find plenty of Yankees gear alongside Red Sox paraphernalia in shop windows. Ron Silverstein, owner of Jack's Men's Store in Chelsea, said he keeps Yankees lids on display because they sell well.

"We have a lot of diehard Yankees fans that will come in and buy some items," he said - although he was careful to add: "Red Sox gear still outsells Yankees, 10 to 1."

Kenner Shoe has two stores in Lawrence where Yankees gear is prominently displayed. The downtown store on Essex Street has a Derek Jeter jersey hanging in the window and boasts various styles of Yankees caps.

There are perils to Yankees loyalty, of course, and they run deep in Lawrence.

Marcus R. Villa, a 22-year-old student at the University of Massachusetts at Lowell who grew up in Lawrence, said his first fight in school was over his Yankees loyalties. Born in Tucson, his family was originally from the Dominican Republic with ties to New York.

Lawrence Police Chief John J. Romero, a fan since he was a child in New York, says there's no getting around it.

"I think everyone knew I was a Yankees fan when I took this job," said Romero, who has been chief for 10 years and keeps a Yankees cap in his office. "People bother you about it. But it comes with the territory."

Laboy said he was even asked about his Yankees affiliation during his job interview with the Lawrence School Committee eight years ago. When a committee member asked whether he was a Yankees fan, Laboy said he replied: "I'm a New Yorker."

He thought it was going to be his make-or-break moment. "What else was I supposed to say?" he said with a laugh.

Duran, the Chelsea resident, said finding other Yankees fans isn't hard, because there are so many transplants from New York in the area. But they still have to navigate delicately through an often-unforgiving Red Sox landscape, he said.

"There was this liquor store in Woburn that had my photo up with the words, 'Don't sell alcohol to this guy if he has a Yankees hat on,' " Duran said. "Every time I wanted a beer, I had to take my hat off."

Duran said he now has a secret weapon in his feud with the Nation: his 7-year-old son. "I taught my son to be a Yankees fan," he said.

Roy A. Avellaneda, a Chelsea city councilor and a Red Sox fan, said he thinks many Latino teens are drawn to the Yankees out of pop culture emanating from the Big Apple. But he also believes many older Latinos in the area cheer for the Yankees because the Red Sox had a bad reputation under longtime owner Tom Yawkey. A number of books have asserted that Yawkey held racist views, and the Red Sox even had to be sued to hire African-Americans as grounds-crew workers.

In addition, the Sox were the last Major League team to integrate their roster. In 1959, they brought up infielder Pumpsie Green - more than a decade after the Brooklyn Dodgers brought up Jackie Robinson.

Not only had the Yankees broken the color barrier four years prior, they also had traded for Hector Lopez, a black Panamanian-born utility player.

Years later, the Yankees developed an even larger following among Latinos with Reggie Jackson, an African-American with a Puerto Rican mother.

"But since then, the Red Sox as an organization have gotten a lot better. You saw it when they brought in Pedro Martinez and Manny [Ramirez], and you see it now with Big Papi," said Avellaneda. "They've definitely made some improvements and have developed a following among Latinos."

Villa, the UMass-Lowell student who once fought to defend his Yankees, said he now cheers for David Ortiz, Big Papi.

"I'm a Red Sox fan because I live here now," he said. But "if I lived in New York, I'd probably be still cheering for the Yankees."

Russell Contreras can be reached at rcontreras@globe.com.