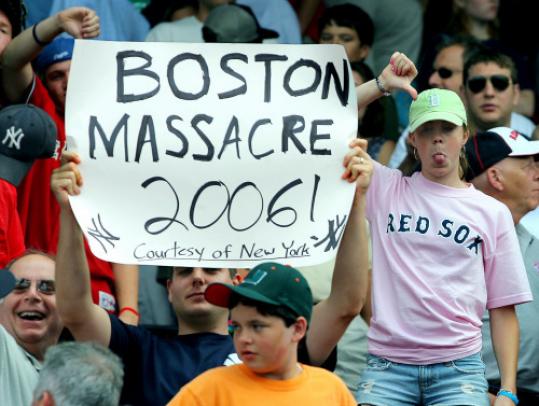 Cheering for New York in Greater Boston requires thick skin. Here are some tips from Yankees fans in Chelsea and Lawrence:

1) Keep up to date with your stats, such as how many World Series titles the Yankees have won (26). No matter where you are, you will need your facts to remind Sox fans when they start talking junk.

2) Wear a Yankees hat often so Sox fans get used to seeing it on you. But be prepared to take it off - in a package store, for example, because the proprietor may refuse to do business with you otherwise.

3) Go to games at Fenway Park with other Yankees fans, or with a girlfriend who's a Sox fan. Either way, you'll have protection.

4) Trying to find a 100 percent Yankees-friendly bar in the area is nearly impossible. But there's Lew's Place in Tewksbury, if you want to watch a game with other Yankees partisans. Bar owner Lewis Reese is a fan and has the place decorated with a life-size image of Reggie Jackson.

5) If you have children, start dressing them in Yankees gear immediately. You need to start early, or risk losing them to Red Sox Nation.

6) Get used to anti-Yankees chants, because you'll hear them early and often.