Anaheim wins it in ninth against Rivera 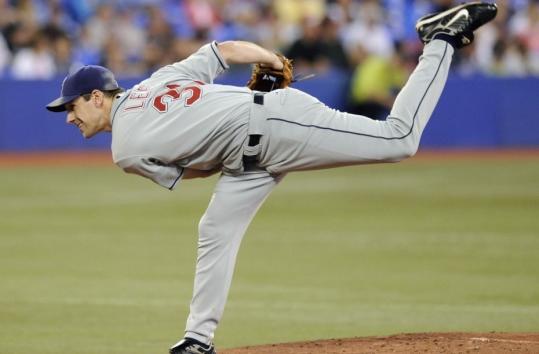 Chone Figgins hit an RBI single with one out in the ninth inning against Yankees closer Mariano Rivera, and the Los Angeles Angels completed a three-game sweep of New York with a 4-3 victory yesterday at Anaheim, Calif.

Howie Kendrick led off the ninth with a single against Damaso Marte (0-2). Gary Matthews Jr., who has only one sacrifice bunt since 2002, squared around twice before striking out. But Marte walked Mike Napoli and Figgins grounded Rivera's first pitch into right field to end it.

Rivera has allowed seven earned runs and 19 hits in 21 1/3 innings during his 19 non-save situations. When a save is in sight, he has given up just one earned run and 13 hits in 30 1/3 innings, converting all 28 opportunities.

Angels closer Francisco Rodriguez (2-2) entered the game in a 3-3 tie and struck out the side in the ninth to get the victory.

Andy Pettitte gave up three runs and 10 hits in seven innings plus with three strikeouts and two walks.

Alex Rodriguez lined a double off the fence in left-center with one out in the eighth against reliever Jose Arredondo and tried to steal third, but was thrown out by Napoli on a close play. Rodriguez and manager Joe Girardi had a heated argument with umpire Bill Welke, but both stayed in the game.

He won his fifth straight decision and has not lost since a 4-3 defeat at Minnesota July 6.

Hernandez (0-1), who was claimed off waivers by the Rockies Wednesday, allowed nine runs on seven hits and walked four in 2 2/3 innings.

Luis Gonzalez and Mike Jacobs each homered in support of Johnson (3-0), who gave up two runs and five hits.

Rangers 15, Orioles 7 - Ian Kinsler broke out of an extended slump with a career-high five hits, including a homer, and visiting Texas emphatically ended its own offensive drought.

Held to one run in their previous three games, the Rangers matched their season high with 20 hits.

Brewers 5, Nationals 4 - Gabe Kapler homered off the pole in left leading off the bottom of the 13th inning and Milwaukee earned its fifth consecutive victory.

Phillies 6, Pirates 3 - Chase Utley hit a tie-breaking homer, and host Philadelphia went on to beat Pittsburgh to move two games ahead of the Mets in the NL East.