Yankees keep him with $275m deal 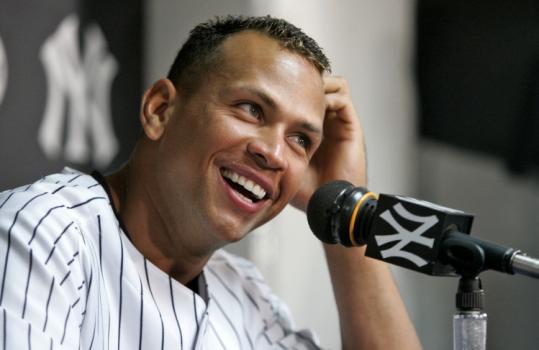 Under his new Yankee contract, Alex Rodriguez can cash in to the tune of millions if he sets the career home run record. (FILE/FRANK FRANKLIN II/Associated Press)
Email|Print| Text size – + By Ronald Blum Associated Press / November 16, 2007

NEW YORK - Alex Rodriguez and the New York Yankees have agreed to the outline of a record $275 million, 10-year contract, a deal that potentially would allow him to earn millions more if he sets the career home run record.

The amount of the guaranteed money was revealed by a person familiar with the negotiations who spoke yesterday on condition of anonymity because the deal hasn't been finalized. A-Rod and his wife, Cynthia, met Wednesday in Tampa with brothers Hal and Hank Steinbrenner, but the parameters of the agreement were set in place last weekend.

"The meeting was a final get-together," Yankees senior vice president Hank Steinbrenner said. "He wanted to make sure myself and my brother knew that he was sincere and serious."

The Yankees still must draft the agreement with Rodriguez's agent, Scott Boras. Asked whether the only remaining details were putting the deal on paper, Steinbrenner responded, "Pretty much so."

Boras wasn't a part of the negotiations, in which managing directors John Mallory and Gerald Cardinale conducted shuttle diplomacy.

"They were the go-betweens initially," Steinbrenner said. "That's how he reached out to us."

The Yankees were notified by Boras Oct. 28 that Rodriguez was opting out of the final three seasons of his $252 million, 10-year contract - the previous record - and becoming a free agent. New York maintained then that it no longer would negotiate with A-Rod because the decision eliminated a $21.3 million subsidy from Texas that was negotiated in Rodriguez's 2004 trade.

About a week later, A-Rod contacted Mallory, a friend who works in private wealth management in Goldman's Los Angeles office. Rodriguez knew the Yankees have a close relationship with the investment bank, which was instrumental in the launch of the team's YES Network.

Mallory called Cardinale, who works in the merchant banking section in New York and helped finance the network. Cardinale in turn got in touch with Yankees president Randy Levine.

A-Rod and the Yankees exchanged proposals via the bankers, and the deal gradually was framed in about a dozen telephone calls.

The sides still are working on putting together a provision that would allow Rodriguez to share revenue created by his pursuit of the career home record held by Barry Bonds. A-Rod has 518 homers, 244 shy of the mark.

"The Yankees have never had a player since Babe Ruth that really had a 100 percent chance" of setting the record, Steinbrenner said. "[Mickey] Mantle should have, but he had too many injuries. It's a historical achievement bonus more than it is an incentive bonus. There is no yearly incentive bonus."

That provision must be drafted carefully because of Major League Rule 3 (b) (5), which states no contract shall be approved "if it contains a bonus for playing, pitching or batting skill or if it provides for the payment of a bonus contingent on the standing of the signing club at the end of the championship season."

Even with that, the commissioner's office allowed the Red Sox in 2003 to give Curt Schilling a provision for a $2 million raise in a season following a World Series championship. Boston won the title the following year.

The Yankees already have been in touch with Major League Baseball, and A-Rod's side contacted the Players Association.

Steinbrenner said Rodriguez was given bad advice by Boras during the time before the decision to opt out.

"Boras did a lot of good things for Alex through the years, and Alex knows that. I mean, obviously, he's going to look to Scott's advice on everything," Steinbrenner said. "That's not unusual today. It's not like he's the only one. And if an agent gets out of line or makes bad decisions, then that's going to hurt the player. And obviously, that's one of the things that happened."

Rodriguez still winds up with baseball's largest contract, a fact that got the attention of Schilling.

"None of us are worth that much relative to 'real world' salaries," the pitcher wrote on his website. "But if someone in the game was getting a contract that big, I am not sure you could argue it being Alex. On the field this guy is the MVP-in-waiting every year, it seems."