THIS STORY HAS BEEN FORMATTED FOR EASY PRINTING
Track and field

Bolt is lightning-fast in 100 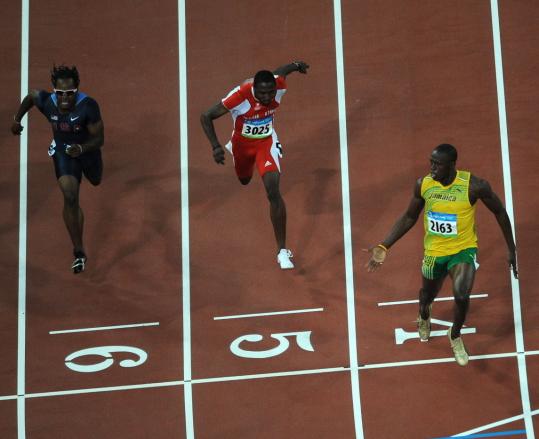 BEIJING - Midway through the men's 100-meter final last night, Usain Bolt turned the race into a one-man show. After stumbling slightly as he left the starting blocks, Bolt cleared the field at the 50-meter mark with his long, powerful strides and finished in a world-record 9.69 seconds.

But Bolt started his celebration 20 meters before the finish. He looked left and right to gauge his lead, which was sizable. Then he extended his arms to the side, the kind of gesture usually seen only after sprinters cross the line.

Approaching the finish, Bolt pounded his heart. He wanted to enjoy his win rather than obliterate the world record he set May 31. His victory lap included dancing and blowing kisses to a stunned crowd of 90,000 at the National Stadium.

"I didn't even know I got the world record until after I finished my victory lap, actually," said Bolt, the first Jamaican to win a gold medal in the men's 100. "One aim was just to come here and be Olympic champion. I did just that, so I was happy with myself. It means a lot to my country and it means a lot to me."

With his record-setting time and celebratory display, Bolt left seven shocked competitors in his wake. His victory looks even more impressive considering this was the first Olympic final with six sprinters who had run under 10 seconds.

Silver medalist Richard Thompson of Trinidad and Tobago trailed Bolt by two-tenths of a second, an eternity in world-class sprinting. The gap tied the largest margin of victory in a men's Olympic 100 final. American Walter Dix closed strongly and earned the bronze in a personal-best 9.91.

In retrospect, all prerace predictions of a three-man showdown among Bolt, fellow Jamaican Asafa Powell, and American Tyson Gay seemed foolish. Gay failed to qualify for the final and Powell finished a disappointing fifth in 9.95. Darvis Patton, the other American in the final, came in eighth with a time of 10.03.

"He's like a LeBron James," said Patton. "You've got a young guy who's doing things that haven't been done before. The guy just broke the Olympic record and the world record.

The dominant performance by the 21-year-old Bolt was the second shocker of the night. The first came in the semifinals when Gay failed to qualify. Bolt was disappointed that the reigning world champion did not compete for the gold. Gay called his failure to advance "devastating."

Gay appeared less than sharp in qualifying rounds Friday, but hoped to work through mechanical and fitness issues during the heats. That proved too tough with truncated training. After suffering a left hamstring strain July 5 in the 200 quarterfinal at the US Olympic track trials, Gay did not have enough time to regain the form he showed setting an American record (9.77) in the 100 or running the fastest time ever (9.68) at the trials.

"My hamstring feels good," said Gay. "It's not bothering me. I don't have any type of excuses. I wasn't too overwhelmed with it being the Olympics. It's just one of those things that happened. Maybe I could have done some more training or more races, but besides that, I just kept trying to get my rhythm through each round.

"I thought I had a better start than I had the first two rounds. It's kind of hard to tell where you're at, try to gauge yourself. I pretty much ran hard to the finish line and gave it all that I had.

"I'm pretty upset. When I get back to the village, it's really probably going to set in. My family's here. Everyone at home is supporting me and praying for me. My spirits are a little down. But at the same time, I gave it my best. Everyone knows that. I feel like I just ran out of time."

Gay estimates that his hamstring injury set his training back 3-4 weeks. As a result, the reigning world champion in the 100 and 200 will leave Beijing without an individual medal. His last chance at any kind of medal comes in the 4x100 Friday. With Dix and Patton on the team, the American are gold medal contenders along with the Jamaicans. But by the time the relay takes place, Dix and Bolt could be very tired athletes, with the 200 also on their schedules.

Competing in the 100 and 200, Dix is handling the load Gay expected to have during the Games. For his part, Gay does not regret attempting the sprint double at the trials. Dix is a medal contender in the 200 competition, which begins Monday. Bolt is a threat to the world record of 19.32 that Michael Johnson set in 1996, though the newly crowned "world's fastest man" had trouble acknowledging that.

Perhaps Bolt's biggest talent is taking the expectations of others in stride and relaxing before, during, and after races at the Games. He is also correct in that there will be plenty of time to think about and set world records. The Bolt era is just starting.

With the way he finished the 100 final, the race looked like a coronation, but far from the ultimate crowning moment in a young career.