THIS STORY HAS BEEN FORMATTED FOR EASY PRINTING
Revolution notebook 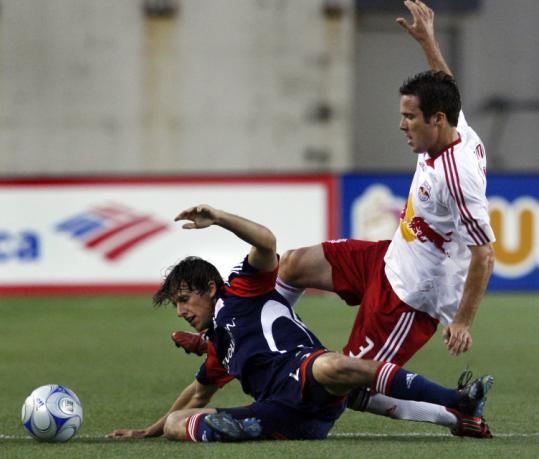 FOXBOROUGH - Before last night, Steve Ralston's most recent performance as a striker was when he was a 19-year-old sophomore at Florida International University. Ralston moved to a playmaking position the next season and has been primarily a midfielder until last night.

Ralston went to a forward position in the 72d minute, scoring seven minutes later as the Revolution and New York Red Bulls tied, 1-1.

"I scored a lot of goals my freshman season," said Ralston, who began his college career at Forest Park Community College in St. Louis.

Ralston went to right wing when he joined the Tampa Bay Mutiny, which had Carlos Valderrama in a playmaking role, in 1996. Ralston set standards at the position, though he has moved into a right back role in emergency situations for the Revolution.

Late last season, Revolution coach Steve Nicol moved Ralston into an advanced midfield slot in a 3-5-2 formation, and he has remained there this season.

Ralston replaced Adam Cristman at forward, with Pat Phelan moving into a holding midfield role and Shalrie Joseph to an attacking slot.

Phelan took an indirect route to joining the Revolution. But destiny also played a part in his career.

Phelan, a midfielder, grew up a Revolution fan in Enfield, Conn., then played at Wake Forest. He was drafted this year by Toronto FC, then came to the Revolution June 3 in a trade for allocation considerations.

But Phelan's Boston-area connections go back to before he was born.

Phelan's mother was several months pregnant when she was in the Orange Bowl stands Nov. 23, 1984, to watch Boston College take a 47-45 win over Miami, the winning touchdown scored by her nephew, Gerard Phelan.

Pat Phelan was born Jan. 16, 1985, and was enrolled in ice hockey programs before parents Thomas and Phyllis Phelan decided their son should switch sports.

"I started playing soccer when I was 5," Phelan recalled last night's game. "My parents pulled me out of hockey because they got tired of those 5:30 ice times."

Phelan's playmaking ability and positioning made him a candidate to be drafted by the Revolution. Nicol has taken a number of former Demon Deacon players, such as Jeremiah White, Michael Parkhurst, James Riley, and Wells Thompson in the draft. But Phelan went to Toronto with the 10th pick, two before the Revolution tabbed defender Rob Valentino.

"Now I can say the Revolution were my favorite team growing up," Phelan said. "Being in northern Connecticut, we root for Boston teams.

Phelan, who played for Oakwood Soccer Club and Wilbraham & Monson, considered attending BC, but wanted to avoid the big city scene and playing in the Big East. "It's hard enough getting accustomed to the league, especially for a rookie," said Phelan, who made his professional debut in the Revolution's 2-0 win in Houston last Thursday. "I had just settled down in Toronto, but I'm happy to be close to home."

Nicol disputed several calls and noncalls by Joe Caroccio, a Florida-based referee working his first MLS game. "I'm not quite sure who was worse, us or the referee," Nicol said. "Teams are going to continue to come here and defend and make it hard on us, and when we go away, we'll do that as well. But if it gets physical, the referee has to protect players. We didn't know which way he was going, what fouls he was going to give." . . . The Red Bulls last earned a point at Gillette Stadium May 22, 2004, breaking an eight-match losing streak and extending their winless streak at Gillette to 14 games . . . The Revolution will open their defense of the US Open Cup July 1 at Veterans Stadium in New Britain, Conn. The Revolution will meet the Richmond Kickers or the Western Mass. Pioneers . . . New Hampshire Phantoms midfielder Romelle Burgess played for Barbados in its 8-0 loss to the United States Sunday. Phantoms midfielder Henry Brauner is with the Philippine national team . . . Former Cape Cod Crusaders forward Ricardo Pierre-Louis signed a developmental contract with the Columbus Crew. Pierre-Louis scored 101 goals in 63 games for Lee University and has six goals in 26 appearances for Haiti.