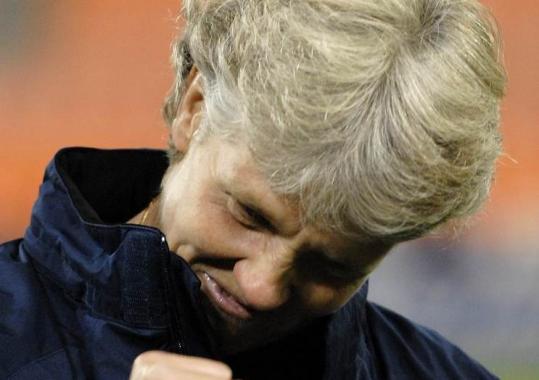 US women's soccer coach Pia Sundhage says of her 13-0-1 squad, "This is a beautiful team with so much talent." (Jonathan Ernst/Reuters)
Email|Print|Single Page| Text size – + By John Powers Globe Staff / May 18, 2008

Her players knew her and yet they didn't know her. Pia Sundhage had played for Sweden in two World Cups and an Olympics, knocking heads with Mia Hamm and the rest of the Fab Five. She had coached the Boston Breakers in the WUSA and scouted for the Americans when they won the gold medal in Athens. But when Sundhage was put in charge of the national team last November, she wasn't sure how to introduce herself.

"I wanted to say something that would remind them of this moment but I couldn't find the English words," said Sundhage. "It was just impossible. In the back of my head, I was hearing the song by Bob Dylan. So I sang, 'The times they are a-changin.' The players looked at me, like, 'What's going on?' And then they started to laugh and cheer."

After the most wrenching year in the history of the US women's soccer team, which included a shattering World Cup loss and an ostracized goalkeeper, the program had turned the page. Greg Ryan had been let go as coach after just one loss in 55 matches. Sundhage had less than nine months to put things back together and get the team ready to defend its Olympic crown in Beijing.

"The best part of me coming in as a new coach is that we can do better than in the World Cup," said the 48-year-old Sundhage, whose squad is unbeaten (13-0-1) under her direction. "It would be much harder if they'd won the gold."

For more than a decade, the team's success made it difficult to do much renovation, to change faces and styles. The US had won two Cups and two Olympic gold medals and always made the awards podium. Each time, though, the trip had become more difficult.

Still, nobody foresaw what happened last year in the World Cup in China, where Brazil ran all over the Americans in a 4-0 semifinal rout, their worst defeat at the global level. Ryan had made a risky move by replacing starting keeper Hope Solo, who'd posted three straight shutouts, with 36-year-old veteran Briana Scurry, and it backfired.

"It was the wrong decision and I think anybody that knows anything about the game knows that," Solo declared after the match. "There's no doubt in my mind that I would have made those saves."

The squad, furious that Solo would call out a teammate, isolated her, leaving her at the hotel while they won the bronze medal. Though Solo apologized for dissing Scurry, nobody was arguing with her main point: "It's not 2004 anymore, it's 2007. You can't live in the past."

Athens was the last hurrah for four of the Fab Five - Hamm, Julie Foudy, Joy Fawcett, Brandi Chastain - and Kristine Lilly is bypassing Beijing to start a family. Fewer than half of the team that started in the Olympic final was on the field for last year's Cup opener.

Christie Rampone is the captain now and Natasha Kai, who was with the under-21 team in 2004, is the hot new gunner.

First, there was some healing to do. Sundhage, who'd been China's assistant coach at the World Cup, had heard a few stories about the star-spangled soap opera. After getting the job, she talked with Ryan and some players to get their versions.

"For me, it's good to know what happened," she said. "But my question to everybody was, 'OK, what did you learn from the situation, and do you want to move on?' "

Standing pat is not an option. The Americans need to get younger and faster just to keep up with their rivals.

"It's getting harder and harder to get that medal," Sundhage says. "Back in 1991, we had four countries that could win the World Cup: the US, Norway, Sweden, and Germany. Today, we have 12 teams going into the Olympics, and 10 could win. It's much tighter at the top."

The Germans, who've won the last two Cups, are the global giants now. The Brazilians, who started five women 21 or younger in 2004, are the most daring and dangerous team in the world. They played the Americans off their feet in the Athens final before losing in overtime. Then, in the Cup, Marta and friends gave them a tutorial.

The US can't beat Germany or Brazil by playing the same old game, as productive as it may have been.

"This is a beautiful team with so much talent," says Sundhage, but she wants her players to assert themselves. "There's so much more we can do. We have to keep essentially on the attack. We have to be brave. Keep possession, dictate the tempo. You don't do that in a day."

Yet Sundhage didn't have the luxury of letting evolution take its course. In the first 15 weeks of the year, the US played in three major tournaments - the Four Nations in China, the Algarve Cup in Portugal, and Olympic qualifying in Mexico - and won them all.

If buying into Sundhage's take-it-to-'em philosophy didn't take much persuasion, it's because her playing and coaching résumé is world-class, her credentials beyond dispute. Her face, after all, once graced a Swedish postage stamp.

"When you know that your coach has experienced the game and knows the physical and psychological demands of the sport, you have a common bond," says Markgraf, who played for Sundhage with the Breakers in 2003. "She knows what she's talking about, instead of someone who learned the game through a book. That gives her instant credibility."

More than her technical expertise, what sets Sundhage apart is her gift for communicating with her players, whether they speak Swedish, English, or Chinese.

Her year in Boston, where Sundhage directed the team to the regular-season title and its first playoff berth and was named Coach of the Year, gave her a window into the soul of the American player.

"They go for it - and there's good and bad in that," she says. "They win a game and they go to the next game. It's important to enjoy the winning feeling. Yeah, we won the game, but what was good? Give me details. How did you feel?"

In the best of times, the Americans won because they were a sisterhood that sweated and sacrificed for each other.

"What has allowed us to be successful in the past was not talent, but teamsmanship," said forward Abby Wambach.

It took the loss to Brazil and the internal friction that followed to drive that point home.

"We stuck together as a team, even though it came across as fractured," said Markgraf. "It brought old and new together. Sometimes, bad things have to happen in order for good things to come out of it."

'I need their hearts'

This still is a team in transition, with new leaders and new voices, still finding its way. As an experiment, Sundhage started Amy Rodriguez instead of Wambach in the Olympic qualifying finale against Canada, which the US won on penalty kicks.

"I wanted to see her reaction and I wanted to see the team's reaction," said Sundhage, whose squad already had earned its Games ticket by beating Costa Rica. "Players stepped up because they couldn't take anything for granted.

"It's important to know that this is a team. We do everything together. We need every one of you and we need you in different ways."

The times may be a-changin', but if the Americans are to win in Beijing, they'll have to bring back the old-school solidarity that made them the meanest sorority on the planet.

"I need their hearts," said Sundhage. "I need all the passion I can get to make this happen."

The expectations haven't changed. The Americans may not be the world champions, but Olympus has been their magical playground, where they've won two golds and an overtime silver.

"I know the direction, I know the goal," says Sundhage. "We're going for the gold medal, but now we have to find the road. It is the road that matters."

John Powers can be reached at jpowers@globe.com