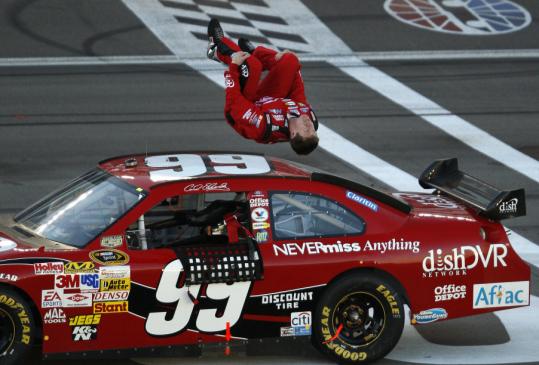 Edwards, who scored his first win of the season in Monday's rain-postponed event in California, celebrated win No. 2 with his trademark backflip. The victory moved Edwards to the top of the Sprint Cup points standings for the first time in his career.

"We do this to win, and winning these races is the greatest," Edwards said. "But what we're trying to do is win the championship this year. That's the goal."

It was the sixth victory for team owner Jack Roush in 11 races at Las Vegas, and it ended Jimmie Johnson's string of three straight wins in the desert.

Edwards caught a break to be in position to win, escaping a penalty when one of his tires rolled onto pit road during a late service stop. NASCAR ruled that a television cameraman shooting from inside the pit box was in the way of crew members and it contributed to the tire breaking free.

"When you think you didn't actually break a rule, you have to keep a level head," said crew chief Bob Osborne.

"I wanted to go ballistic and yell and scream and kick and punch and do whatever I had to do to get my way. But I kept a level head and NASCAR reviewed it."

Since his team was not penalized, Edwards remained in contention for the win. But two late restarts gave the competition a chance to run down his No. 99 Ford.

Kurt Busch's wreck with 11 laps to go brought out the caution, and Edwards was in front of Earnhardt on the restart with five to go. But Earnhardt appeared to spin his tires at the start, and Matt Kenseth and Jeff Gordon had to split his car to avoid running into him.

"I've been out of the game so long," joked Earnhardt, who hasn't consistently run up front for several years. "I ain't had a whole lot of practice out there. I looked like a tool out there."

Once past Earnhardt, Gordon and Kenseth raced side-by-side and Edwards pulled away. Then Gordon drifted into the side of Kenseth's car, starting a spin that led to Gordon slamming into the inside wall. His Chevrolet broke into pieces, and NASCAR had to red-flag the race to clean up the debris.

That accident set up a two-lap sprint to the finish, but the wait time cooled Earnhardt's tires and he was unable to mount a charge on Edwards on the restart. Earnhardt's losing streak stretched to 64 races. Greg Biffle was third and was followed by the Richard Childress Racing cars of Kevin Harvick and Jeff Burton.

Kyle Busch, who was trying to become the first driver to win from the pole at Las Vegas, struggled with adjustments to his the entire race and had to settle for 11th on his hometown track.

Johnson, the two-time defending series champion, was looking for a fourth straight win in the desert. But his team struggled the entire weekend, he fell two laps down in the race and finished 29th.

Two-time series champion Tony Stewart bruised his foot 108 laps into the race when his right front tire failed and he hit the wall for the second straight day.

"I was kind of worried, my legs, my entire legs from my hips down were just tingling," Stewart said. "And I had pain in my lower back and that kind of scared me a little bit."

He slowly climbed from his car and gingerly walked with the assistance of two emergency personnel into a waiting car that took him to the infield care center. He said he still planned to participate in the Cup test scheduled for today and tomorrow in Phoenix.