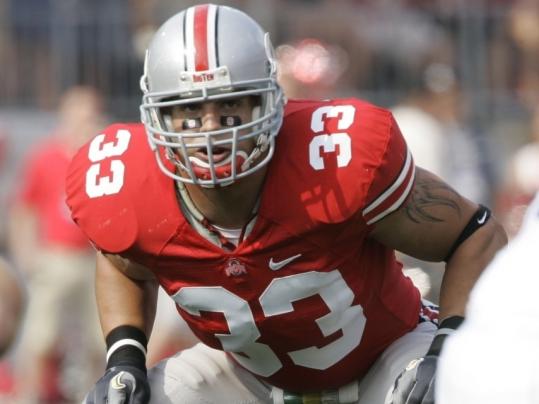 NEW ORLEANS - There was little chance of little Jimmy Laurinaitis ever becoming a concert pianist.

Dad Joe was a professional wrestler known as "Animal." Mom Julie was a bodybuilder who frequently complained she was not "cut" enough. You kinda see where this is going.

The Laurinaitis family was all about physicality. This wasn't an artsy-craftsy family. Some things just are what they are, to paraphrase a certain football coach of our acquaintance.

So little Jimmy grew up to be a linebacker, and not just any ol' linebacker, but a linebacker at a school that knows something about linebacking. He grew to be 6 feet 3 inches and 240 pounds, and he has proven to be so adept at diagnosing plays and tackling people that he is the latest recipient of the Butkus Award, signifying that he is the best collegiate linebacker in the land.

He will put those skills on display for perhaps the final time as a collegian tomorrow night. For when the BCS title game between Ohio State and LSU is over, Jim Laurinaitis will be on the clock. He will have one week to decide whether to enter the NFL draft.

This decision may be of some interest to the Patriots and their fans, for New England picks seventh this year and who among us doesn't know that the Patriots have an obvious need for a young linebacker? And, yes, we all know that they historically do not draft for need, but suppose they do happen to like Laurinaitis? He could be there.

"I haven't thought about it that much, honest ly," the Buckeye junior says. "I'll talk to guys who have been in this position and who have left, and I'll talk to [ex-Buckeye] A.J. Hawk, who had this decision and who came back.

"I love this university. I love this team. It's a big decision, but, either way, it's going to be the right decision. It's a win-win."

It's really not his favorite topic at the moment, and he addresses it only because people like me are bugging him. The truth is that, like the rest of the Buckeyes, he is far more interested in getting ready to play LSU for the national championship than he is on discussing his future. He believes that Ohio State, a 41-14 loser to Florida in last year's BCS title game, comes first. The pros can wait.

"Revenge is not the motivation," he maintains. "We're just excited to be a part of this, to have another chance at winning the national championship."

There is no question, however, that something was amiss last year. Perhaps Florida was better. But Florida was not 41-14 better. No one in America should have been 41-14 better than Ohio State.

"I have to admit we weren't mentally prepared last year," Laurinaitis says. "I think a lot of us thought that maybe our team was invincible, with a Heisman Trophy winner at quarterback. We thought we couldn't lose.

"When Coach [Jim] Tressel sent us home for Christmas, we weren't as focused when we came back. This year, it's a business trip. A weeklong road trip, really."

Tressel figured he had to change things up after what he saw last year. Last year the Buckeyes arrived in Arizona 10 days prior to the championship game. This year they arrived five days in advance.

The mentor won't need to do any motivating for his defense. Laurinaitis says his troops will be ready.

"Every defense should have an identity," says the first-team All-American. "Some say, 'We cause turnovers.' Some say, 'We get to the quarterback.' We say, 'We fire to the ball.' Our defense just flies to the ball.

"Maybe we're not always doing the right thing, but we are always flying to the ball and having fun. There was a newspaper picture of us after the Washington game. It showed 10 Buckeyes converging on the ball carrier. We play with effort, and we hunger to get better."

Laurinaitis prides himself on being the leader of such a group.

"I love my position because I love being the quarterback of the defense," he declares. "I like being in control. I like making the checks. If someone else makes a check, I get angry. I say, 'I'm the one who's supposed to make the checks. If the coaches get mad, let them get mad at me.' "

Far from being defensive about his father's bizarre combination of celebrity and infamy, Laurinaitis is proud of his upbringing. For one thing, he was the envy of his playmates. He knew Hulk Hogan. He knew The Rock. Like, how awesomely cool was that?

His father was on the road a lot. Laurinaitis recalls being taken by his dad to such places as Mississippi and California, but not all that often. "He would never take me out of school," he explains.

As a proper Minnesotan (Wayzata), Laurinaitis grew up playing hockey as well as football. He was, of course, a rugged defenseman, although he says he was not exactly a goon. "But I wasn't much of a stickhandler," he admits.

Football was clearly his game. He played in six games, starting three, as a true freshman at Ohio State, learning, among other things, what the word "rivalry" really meant.

"I was enough of a fan to know that Ohio State and Michigan was a rivalry," he says, "but I wasn't prepared for how much the fans hated each other, nor was I prepared for seeing a clock in one of our facilities that counts down the days, hours, minutes, and seconds until the next Michigan game."

His Buckeye teams are 3-0 against the Wolverines, with this year's game being especially important since it came the week after his squad had been upset by Illinois and apparently knocked out of the running for the national championship.

"If we had lost to Michigan after losing to Illinois, people would probably have said it was the worst year in Ohio State football history, or something like that," he chuckles. "But now people don't even remember the Illinois game."

Yup, life has its funny little twists and turns, and Ohio State will indeed be playing for the national title tomorrow. For a little personal subplot, you can keep your eye on No. 33. See if you think he'd look good in a Patriots uniform.