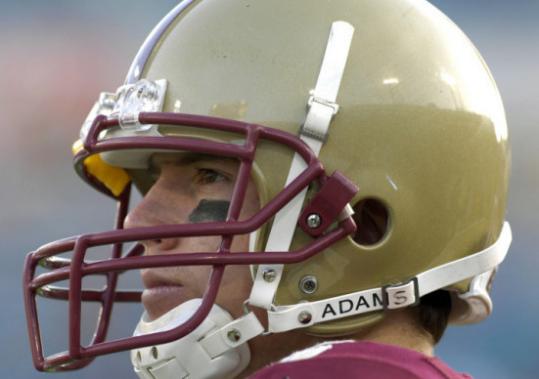 With his time at BC down to one game, Matt Ryan will soon look forward to what he hopes will be a long career in the NFL. (AL MESSERSCHMIDT/Getty Images)
Email|Print| Text size – + By Mark Blaudschun Globe Staff / December 16, 2007

It was business as usual - at least as usual as it can be for Boston College quarterback Matt Ryan these days - including football practice and media commitments.

But the practice was scaled down - just a 70-minute conditioning workout since the Eagles' next (and final) game of the 2007 season isn't until Dec. 28 against Michigan State in the Champs Sports Bowl in Orlando, Fla. Game preparation won't begin until the end of this week.

Unlike the previous 13 games, the stakes are different this time. No championships are on the line. The motivation has to come from within for a bowl game that in the grand scheme of things doesn't mean a whole lot.

"I think it will be a great trip," said Ryan, putting his best spin on the Disney World tour that was the reward for not winning the Atlantic Coast Conference championship game against Virginia Tech (which earned a Bowl Championship Series bid to the Orange Bowl). "We want to continue the bowl streak [which stands at seven straight wins]. For the fifth-year guys, it will be the last time we put on a BC uniform. To get to 11 wins is something which hasn't been done in some time. So there are a lot of things to motivate us."

Forget the fact that Michigan State is 7-5 and finished tied for seventh in the Big Ten. "Any time you go to a bowl game, you know you are going against a good team," said Ryan. "That was one of the things we got from [former BC coach Tom] O'Brien. You always have to respect your opponent. We know what's at stake. We will be pumped up."

For Ryan, the Michigan State game will be his curtain call. The fifth-year senior received his undergraduate degree in communications last May and took postgraduate courses at night this fall. "Turned in my last paper the other day," he said. "So I'm officially done."

Done with academics. The football aspect will still include another couple of weeks of practice. But Ryan is already looking toward the winter and spring and playing in the NFL.

"There are some things you need to get in order," said Ryan, who will move out of his apartment in Boston before Christmas, spend a few days after the Champs Bowl with his parents at their condo in Florida, then prepare for a potential career in the NFL. He will play in the Senior Bowl in Mobile, Ala., in January, prepare for the NFL Combine in February, and spend his winter in Arizona working out and waiting for the draft in April.

"I have to prepare to move on because my life is about to change," he said. "It's something I have to prepare for. At the same time, there are still certain things that need to be done at BC. There is still one more game, one more opportunity to go out and play for a school that means so much to me."

Ryan says he knows better than to make guesses as to where he might wind up in the NFL. "You never know where you are going to go because so many things can change. You never know how it's going to play out. I'm not Nostradamus. I'm not going to predict anything."

"We went out and tried to accomplish some things [winning a conference championship]. Ultimately, we didn't get there. We came close, we came very close. But we didn't get it done. It was tough to lose back-to-back games [Florida State and Maryland]. I don't think that has happened since I've been here. But we also did some good things. We got to No. 2 in the country. That was a great thing for BC. We're at No. 14 now, and if we win, we can probably get back into the top 10, which is a great year and a great way for the senior class to go out."

Ryan hopes the success of the past two years will be a springboard for BC. "The bar has been set," he said. "As a program, we are close. I wish [next year's team] will be able to break through that ceiling. We got to the [championship] game, and we have to go out and win that game. We did some good things here. The program is going in the right direction. Hopefully, it will continue."

Ryan leaves BC with eight passing records (including single-season total yardage, 4,258, and touchdown passes, 28, held by Doug Flutie), and recognition. He was the ACC Player of the Year, and received All-America recognition and the Johnny Unitas Award (for best senior QB). He finished seventh in the Heisman Trophy voting.

Ryan will stay busy for the next several months with new challenges, but he will miss BC.

"It's going to be difficult leaving this place," he said. "For a football player, it's different; it's not like it is for other students where you go home for a month during the holidays and are home for three months in the summer. I have been in Boston for five years, taking classes, working out, just being here. I haven't been away from those guys in the locker room for more than a week in five years. I'm going to miss a lot of those guys."

Thus ends Ryan's run at BC.

"It was great," he said. "But I'm excited about what's coming up and am going to try and make the most of it."