No Orange Bowl for Eagles after loss to Virginia Tech 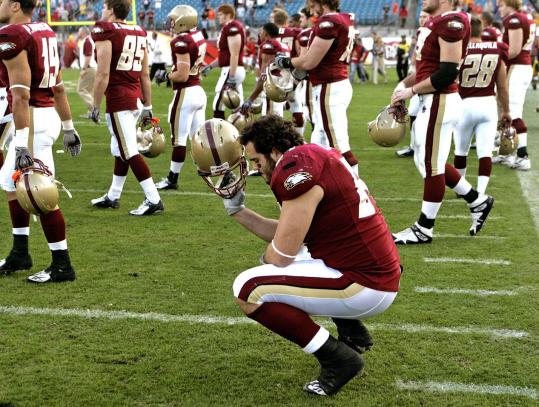 The college football games played after the clock strikes midnight on Dec. 31 are the ones with the cachet. In BC's case, playing in the Orange Bowl for the first time since 1943 was the goal.

But BC will not be playing in that Jan. 3 game. The Atlantic Coast Conference Orange Bowl representative instead will be Virginia Tech. The Hokies made the plays that mattered yesterday, coming back from 10-0 and 16-9 deficits to beat BC by a 30-16 score in the ACC championship game at Jacksonville Municipal Stadium.

"They made plays, and we didn't make enough of them," declared BC coach Jeff Jagodzinski.

The mentor was referring to third-down, and even some fourth-down, plays BC didn't execute and Virginia Tech did. The go-ahead Virginia Tech touchdown, for example, was a touchdown pass from game MVP Sean Glennon to Eddie Royal on third and 13 from the BC 24. On the previous BC possession, quarterback Matt Ryan had been stuffed for no gain attempting to sneak for a first down.

"We needed to get a better push up front," said Jagodzinski with a sigh.

The second half was completely deflating. The Eagles were shut out and were limited to four first downs and 112 yards in total offense. Even worse, onetime Heisman Trophy candidate Ryan threw interceptions on each of his last two possessions, the second of which was run back by Xavier Adibi for a 40-yard icing-on-the-cake touchdown.

Call it revenge. Call it vindication. Or simply call it a market correction. For this was a rematch of an Oct. 25 confrontation in Blacksburg, Va. On that rainy evening, the Hokies dominated for more than 56 minutes before Ryan rallied his team for a pair of dramatic touchdowns (sandwiched around a recovered onside kick) to pull out a 14-10 victory that vaulted BC to a ranking as the No. 2 team in the country.

The Hokies were stunned and angry, and since that night, they have been a different team. They now have won five straight games, and in none of them has an opponent scored a point in the fourth quarter.

They now come out at people with two quarterbacks, which is not normally considered an ideal M.O. But it certainly works for coach Frank Beamer.

Yesterday, Glennon threw for three touchdowns while Tyrod Taylor, a more mobile sort of QB, ran for 36 yards, 31 on a fourth-quarter ramble that triggered an eight-play, 84-yard touchdown drive culminated by the aforementioned Glennon toss to Royal. That score put the Hokies ahead to stay at 23-16 with 7:12 remaining to play.

But something had happened long before that to alter the flow and tone of this game.

It is one of the great givens in college football that under Beamer, Virginia Tech is the King of Special Teams. Virginia Tech teams are renowned for their unparalleled ability to block kicks, be they punts, field goals, or extra points. Entering this game, the Hokies had blocked a staggering total of 115 assorted kicks in 252 games. You can now make that 117 in 253.

BC had taken the opening kickoff and moved with dazzling efficiency for a first down at the Virginia Tech 26 before the drive stalled. Jagodzinski called on Steve Aponavicius to attempt a 36-yard field goal, and Duane Brown blocked it. You figure, "Hey, it's Virginia Tech; it's going to happen." And you move on.

But that wasn't exactly the mind-set after Ryan had scrambled 14 yards for a touchdown in the second quarter. Out trotted Aponavicius for the perfunctory extra point. You expect him to kick the point that will put you up by 10 at 17-7. But that is not what happened.

Brown blocked another kick, and the play didn't end there. Brandon Flowers made a very deft scoop of a bouncing ball and took it to the other end zone for 2 Virginia Tech points. This is not something you see every day, week, or year, even if you are a Virginia Tech season ticket-holder.

It was a 3-point swing on the scoreboard and it was an incalculable boost to the Virginia Tech spirits, because it reminded the Hokies who they were.

Trailing by 7 rather than 10, Virginia Tech was a revived team. The Hokies held BC to a one-first-down possession before taking the ball back on their 20. With Glennon completing six passes - the last of which was an artful fade into the left corner of the end zone to Josh Hyman for a 13-yard score - the Hokies were able to come out of a half in which they had some very rough moments tied at 16 and feeling very good about themselves.

BC, meanwhile, had to be feeling confused and unfulfilled. The Eagles had significant advantages in first downs (20-13) and total yardage (277-149) and no advantage whatsoever on the scoreboard. In fact, BC had only one offensive touchdown, the other one coming when Matt Herzlich dislodged the ball from Taylor and Jamie Silva picked it up in midair, returning it 51 yards for a bizarre touchdown.

"We got down there around the 30 a few times and couldn't get points," said Jagodzinski. "I think we had 49 snaps at halftime. We moved the ball. We just didn't get enough points."

BC would score no points at all in the second half. Trailing, 23-16, its last great chance came with an advance to the Virginia Tech 19. But on fourth and 4 at the Hokie 13, a harassed, retreating Ryan threw a weak no-hoper that was intercepted by Vince Hall with 2:25 remaining.

Ryan was granted one last chance to duplicate the Blacksburg miracle when BC got the ball back with 34 seconds to play at its 35, but Barry Booker deflected a third-down pass into the hands of Adibi, who scampered into the end zone for the touchdown that ensured Virginia Tech's trip to the Orange Bowl.

BC's next game will be played in the calendar year 2007. That was not the plan.

Bob Ryan can be reached at ryan@globe.com.