Oliver Ames homes in on crown 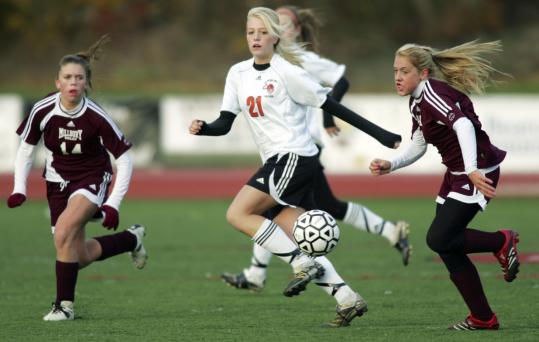 BROCKTON - With the whole town of Easton seemingly there in support, Oliver Ames defeated Millbury, 2-0, for the MIAA Division 2 girls' soccer state title.

The game was much more lopsided than the final score indicated. The Tigers' defense, suffocating all season, limited the Central Mass. champions to just one shot.

Oliver Ames (22-1-1) scored two goals in the first half and had a third taken away because of a foul. The Tigers held possession for the majority of the game, limiting the scoring chances for Millbury (15-7-2).

It was like a home game for the Eastern Mass. champions as the match was played at Rocky Marciano Stadium in neighboring Brockton.

A great offense and a stellar defense paved the way to the championship. With a goal differential of plus-49 for the season and multiple 15-goal scorers, it was certainly a standout season for Oliver Ames.

"I'm not surprised that we were this dominant," Oliver Ames coach Britt Sellmayer said. "We scored 57 goals and only surrendered eight goals in 24 games."

The players echoed the coach's assessment. Senior captain Kelly Matthews said the team had a lot of confidence going into yesterday.

"We knew we were the better team," Matthews said. "We played well as a team. We became so close as a team. Everybody gets along so well."

Matthews, who had a goal and an assist, led the offense, while sophomore goaltender Samantha Brown posted the shutout. Junior Michelle Sirois scored the other goal.

The Tigers outscored opponents throughout the tournament, 11-1, surrendering the lone goal in the South sectional championship game.

Oliver Ames was awarded a corner kick in the 10th minute, which Matthews headed into the net, however, the score was called back for a push-off foul.

Matthews quickly made up for it with the first of the Tigers' two highlight-reel-worthy scores. In the 17th minute, Matthews intercepted a clearing pass and kicked it in the lower left corner from 14 yards out.

With just under five minutes remaining in the first half, Matthews again intercepted a Millbury pass deep in the zone. This time, she passed it to Sirois, who arced a beautiful shot over Millbury's goaltender.

"I saw her open," Matthews said. "She made an awesome shot."

For video highlights of the Division 2 final, go to Boston.com/schools.