THIS STORY HAS BEEN FORMATTED FOR EASY PRINTING
Dynamo 2, Wizards 0

Houston, we have an MLS Cup rematch 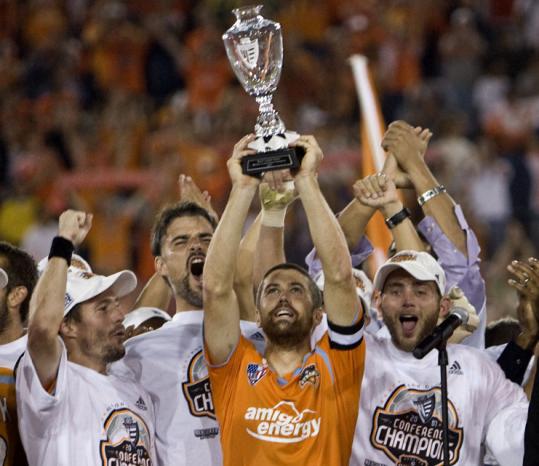 HOUSTON - History will be made in next Sunday's MLS Cup, regardless of whether the Revolution win it for the first time in four tries.

Nate Jaqua and Dwayne De Rosario scored and the Houston Dynamo advanced to the final with a 2-0 win over Kansas City in the Western Conference championship game last night before 30,972 at Robertson Stadium. For the first time in the 12-year history of the league, the same teams will meet in the final in successive years.

Playing before a rowdy, sellout crowd for the second straight weekend, Houston dominated at both ends, outshooting Kansas City, 11-3. Dynamo goalkeeper Pat Onstad didn't have to make a save.

The Dynamo beat the Revolution on penalty kicks after a 1-1 tie in last year's championship match. The Revolution reached their third consecutive MLS Cup with a 1-0 win over Chicago Thursday night.

The teams that will meet next Sunday at RFK Stadium are similar to the ones that battled for the MLS Cup at Pizza Hut Park last season. Nine of Houston's starters last night were in the starting lineup against the Revolution last November. Eight Revolution players who started against Chicago Thursday took the field for the opening kickoff against the Dynamo in Frisco, Texas.

Neither team was tempted by the so-called Beckham Rule. Both refrained from adding international stars this season, and each eliminated teams that went for high-priced talent. New England ousted New York (Juan Pablo Angel and Claudio Reyna) and Chicago (Cuauhtemoc Blanco) in the Eastern Conference playoffs. In the first round, Houston dismissed Denilson and FC Dallas.

Defender Adrian Serioux (FC Dallas) and striker Alejandro Moreno (Columbus) are no longer with the Dynamo, but Houston brought in the creative Joseph Ngwenya (who tied Brian Ching for the team lead with seven goals), former Fire striker Jaqua, and midfielder Richard Mulrooney, a vital cog for the San Jose Earthquakes when they won two MLS Cups earlier this decade. The San Jose franchise moved to Houston before last season.

The Dynamo created good scoring chances from the start and finally took a 1-0 lead on a corner kick in the 35th minute. Mulrooney hooked his high kick toward the goal and the 6-foot-3-inch Jaqua outleaped Kansas City goalkeeper Kevin Hartman to head it into the top left corner of the net. It was the first goal allowed by the Wizards in a span of 371 minutes.