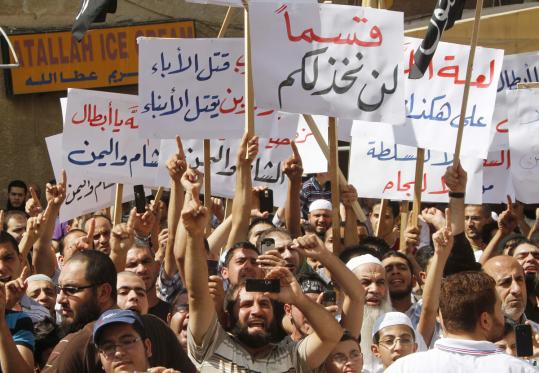 BEIRUT - Syria’s foreign minister warned the international community yesterday not to recognize a new umbrella council formed by the opposition, threatening “tough measures’’ against any country that does so.

Foreign Minister Walid al-Moallem did not specify what measures Damascus might take. But he went on to say that countries that do not protect Syrian missions could find their own embassies treated in the same way.

“We will take tough measures against any country that recognizes this illegitimate council,’’ Moallem said without elaborating.

The Syrian National Council, announced last week in Turkey, is a broad-based group that includes most major opposition factions. No country or international body has recognized it as a legal representative of the Syrian people. Bourhan Ghalioun, the opposition council’s most prominent official, said he expects the organization will be recognized “in the coming few weeks.’’ Moallem’s comments came as the council was scheduled to hold two meetings yesterday, one in Cairo and another in Stockholm.

Damascus appears concerned that if the Syrian National Council is recognized by the international community, it could play the same role as the National Transitional Council in Libya that ultimately overthrew Moammar Khadafy.

Syria’s top diplomat was speaking during a joint news conference with a delegation from the left-leaning ALBA bloc of mostly Latin American countries, which includes Cuba, Venezuela, Ecuador, and Bolivia. The ALBA officials were visiting Damascus to express solidarity with Syria and met yesterday with President Bashar Assad.

State-run news agency SANA quoted Assad as telling the delegation that Syria aims to make political reforms, then end armed presence. But past promises of sweeping reforms have not been carried through, and the opposition says it will accept nothing short of his departure.