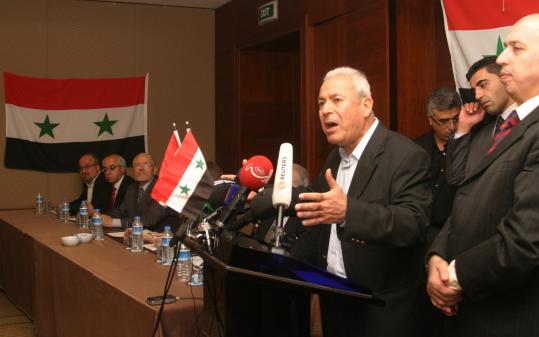 BEIRUT - Syrian dissidents formally established a broad-based national council yesterday designed to overthrow President Bashar Assad’s regime, which they accused of pushing the country to the brink of civil war. Syrians took to the streets in celebration, singing and dancing.

Meanwhile, in a restive northern area, gunmen killed the 21-year-old son of Syria’s top Sunni Muslim cleric in an ambush, the state-run news agency reported. The cleric, Grand Mufti Ahmad Badreddine Hassoun, is considered a close supporter of Assad’s regime and has echoed its claims that the unrest in Syria is the result of a foreign conspiracy.

The announcement of the Syrian National Council at a news conference in Istanbul appeared to be the most serious step yet to unify a deeply fragmented opposition. It follows five days of intense battles between the Syrian military and army defectors in the country’s central region that raised the specter of all-out armed conflict.

Prominent Syrian opposition figure Bourhan Ghalioun, who read out the founding statement of the SNC at the news conference in Istanbul, accused the regime of fomenting sectarian strife in Syria to maintain its grip on power.

“I think that this [Assad] regime has completely lost the world’s trust,’’ he said. “The world is waiting for a united Syrian [opposition] that can provide the alternative to this regime, so that they can recognize it.

“The council denounces the [regime’s] policy of sectarian incitement . . . which threatens national unity and is pushing the country to the brink of civil war.’’

Syria’s volatile sectarian divide means that an armed conflict could rapidly escalate in scale and brutality. The Assad regime is dominated by the Alawite minority, an offshoot of Shi’ite Islam, but the country is overwhelmingly Sunni Muslim.

Until now, the opposition movement has focused on peaceful demonstrations, although recently some protesters have been reported to have taken up arms to defend themselves against military attacks. Army defectors have also been fighting government troops.

Yesterday’s killing of the mufti’s son took place in the Saraqeb region of the restive northern Idlib Province as he left the university where he studied. He was shot in the chest and kidney and died later of his injuries. The news report gave no details on who might have been behind the killing.

In forming a national council, the Syrians are following in the footsteps of Libyan rebels, who formed a Transitional National Council during the uprising that ousted dictator Moammar Khadafy. The Libyan council won international recognition and has now become the main governing body that runs the country.

Groups of Syrians poured into the streets in southern and central regions of the country to celebrate the announcement.

Although the mass demonstrations in Syria have shaken one of the most authoritarian regimes in the Middle East, the opposition has made no major gains in recent months. It holds no territory and still has no clear leadership.

The Syrian opposition consists of a variety of groups with differing ideologies, including Islamists and secularists, and there have been many meetings of dissidents claiming to represent Syria’s popular uprising since it erupted seven months ago. But the new council is the broadest umbrella movement of revolutionary forces formed so far.

A group of Syrian activists had declared the preliminary formation of the council last month, but its structure and goals, and a founding statement signed by major opposition factions, had not been announced until this conference.

The SNC announced in Istanbul appears to have received the recognition of the largest Syrian opposition factions.

Members said it includes representatives from the Damascus Declaration grouping, a prodemocracy network based in the capital; the Syrian Muslim Brotherhood, an Islamic political party banned in the country; various Kurdish factions; and the grass-roots Local Coordination Committees, which have led nationwide protests; as well as other independent and tribal figures.

Ghalioun, the Istanbul conference spokesman, said one major benefit of the council to the Syrian opposition would be to provide a single body with which other countries could coordinate. He urged Syrians everywhere to support it and said it would be a vehicle for democratic change.

The council’s statement said it categorically rejects any foreign intervention or military operations to bring down Assad’s regime but called on the international community to protect the Syrian people from “the declared war and massacres being committed against them by the regime.’’

It said that protesters should continue to use peaceful means to topple the Syrian leader.

The organizers have not named a leader for the national council but appeared to give a leading role to Ghalioun, a respected and popular opposition figure who is also a scholar of contemporary oriental studies at the Sorbonne in Paris.

Syria’s uprising began in mid-March amid a wave of Arab world antigovernment protests that have so far toppled autocrats in Tunisia, Egypt, and Libya.