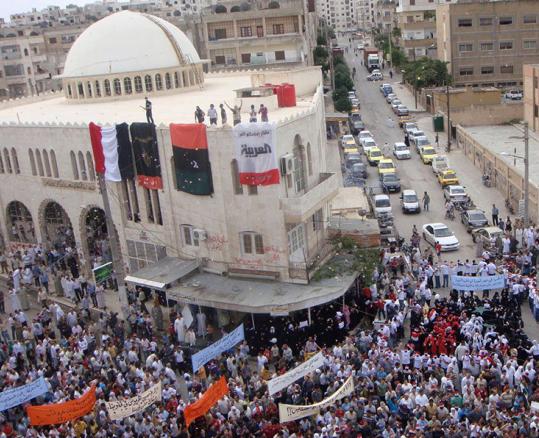 Demonstrators such as these in Idlib yesterday and elsewhere in Syria have increasingly taken up arms and been joined by army defectors in their fight against the government crackdown. (AFP/Getty Images)
By Bassem Mroue Associated Press / October 1, 2011

BEIRUT - Syrian troops fought intense battles yesterday with hundreds of fellow soldiers who have turned their weapons against the regime of President Bashar Assad, revealing the increasingly militarized nature of an uprising started months ago by peaceful protesters.

Across the country, tens of thousands of demonstrators took to the streets as they do each Friday, braving gunfire by government forces who have waged a relentless crackdown.

At least 11 protesters were killed and scores were wounded, human rights groups said.

Opposition activists and the government confirmed a fourth straight day of battles in Rastan, just north of the central city of Homs. The fighting, which began with a government assault on Tuesday, is some of the most intense since the outpouring against Assad’s regime began in mid-March.

The army defections as well as reports that once-peaceful protesters are increasingly taking up arms to fight the government crackdown have raised concerns of the risk of civil war in a country with a deep sectarian divide.

About 250 tanks and other army vehicles began entering the town early in the day, according to the London-based Syrian Observatory for Human Rights.

“The army has been trying to push forward in Rastan for the past four days but they have not been able to,’’ said an activist who spoke on condition of anonymity because of the sensitivity of the topic.

The Syrian government has banned foreign journalists and placed heavy restrictions on local media coverage, making it difficult to independently verify events on the ground. The United Nations says some 2,700 people have already died in the government crackdown since mid-March.

The army defectors involved in battles in the Rastan area and in the Jabal al-Zawiyah region in the northern Idlib province number around 2,000, according to another prominent rights activist who also spoke anonymously.

Syria has a volatile sectarian divide, making this kind of civil unrest one of the most dire scenarios.

The Assad regime is dominated by the Alawite minority, an offshoot of Shi’ite Islam, but the country is overwhelmingly Sunni Muslim.

The town of Rastan, from which the Syrian army draws many of its Sunni Muslim recruits, has seen some of the largest numbers of defections to date.