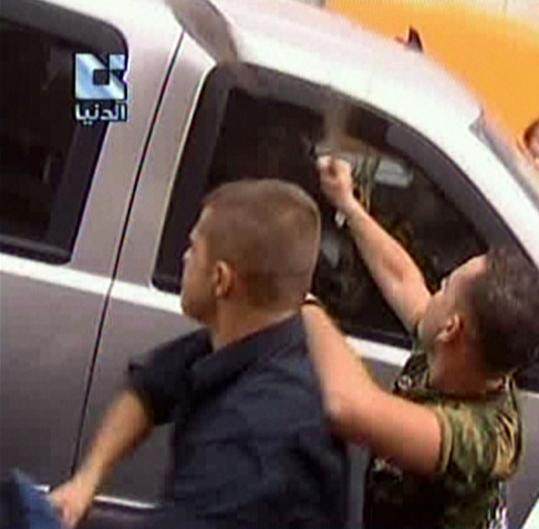 BEIRUT - Angry supporters of President Bashar Assad’s regime hurled tomatoes and eggs at the US ambassador to Syria yesterday as he entered the office of a leading opposition figure, then trapped him inside the building for three hours.

The Obama administration blamed the Syrian government for the attack in Damascus, saying it was part of an ongoing orchestrated campaign to intimidate American diplomats in the country. Secretary of State Hillary Rodham Clinton condemned the attack as wholly unjustified.

Ambassador Robert Ford, an outspoken critic of Assad’s crackdown on the 6-month-old revolt against the regime, has angered Syrian authorities before by showing support for the uprising. The latest incident promises to raise tensions even further.

came under attack by about 100 Assad supporters as he arrived for a meeting with Hassan Abdul-Azim, who heads the outlawed Arab Socialist Democratic Union party. Abdul-Azim is a strong critic of Assad’s regime and was briefly detained by authorities earlier this year.

Such incidents are usually not spontaneous in Syria, and the attack yesterday came amid accusations by Damascus that Washington is inciting violence in the country.

The protesters, who were waiting with eggs and tomatoes when Ford’s delegation arrived, launched the attack as the Americans entered the building.

In Washington, the State Department said that a rowdy, violent mob tried to attack Ford and several American embassy workers in Damascus. Spokesman Mark Toner said Ford and his colleagues were unharmed and are now safe.

“This inexcusable assault is clearly part of ongoing campaign of intimidation aimed at diplomats . . . who are raising questions about what is going on inside Syria,’’ Clinton said. “It reflects an intolerance on the part of the regime and its supporters.’’

White House spokesman Jay Carney called the attack unjustifiable but said the United States had no plans to recall Ford from Damascus.

Ford and his colleagues had parked a block away from Abdul-Azim’s office and walked to the building, where they were attacked, Toner said.

Abdul-Azim said that after Ford had escaped the initial attack and entered the building, the Assad supporters tried to force their way in, breaking some door locks. Office staff prevented them from rushing inside, but the ambassador was trapped inside for about three hours. Ford called the US Embassy for help and alerted Syrian authorities to the situation, but Syrian security forces did not show up for more than an hour.

Syria’s Foreign Ministry said in a statement that it took all measures needed to protect the ambassador and his team. Scores of angry Syrians stood outside the building ready to pelt Ford again if stepped outside. Smashed eggs could be seen at the entrance as several policemen guarded the gate.

“We don’t want him anywhere in Syria, and if I ever see him I will throw whatever I am carrying at him,’’ said 21-year-old student Majd Mutlaq, standing outside Abdul-Azim’s office with a bag of eggs and tomatoes. Mutlaq said he showed up after he heard the ambassador was inside.