Thousands take to the streets in at least 18 cities 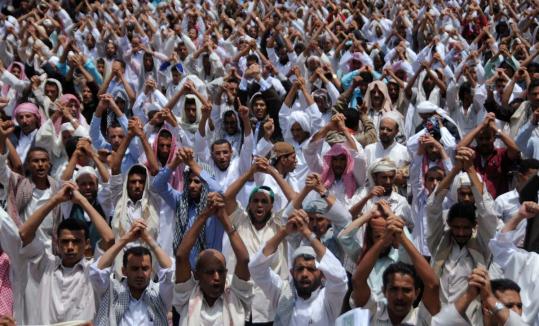 SANA, Yemen - Hundreds of thousands of Yemenis poured into the streets of major cities and towns across the country yesterday, keeping the pressure on the nation’s embattled president to step down.

The mass demonstrations in the capital, Sana, and at least 17 other cities and towns, including Taiz and Ibb, were the largest since President Ali Abdullah Saleh left a hospital in Saudi Arabia, where he was recovering from wounds suffered in a June attack on his palace compound, and signaled he intends to return home soon.

Yemen is reeling from nearly six months of protests by activists calling for an end to Saleh’s 33 years in power. The crisis has sparked armed conflict between Saleh’s forces and heavily armed tribesmen who have turned against him, further destabilizing the already fragile and impoverished country. And there are fears that Yemen’s Al Qaeda offshoot will gain from the turmoil and have a freer hand in plotting attacks on the West.

Yesterday, hundreds of thousands of antigovernment protesters defied the scorching summer weather and the dawn-to-dusk fasting hours during the holy month of Ramadan to renew their demands for Saleh’s resignation, waving Yemeni flags and chanting slogans, according to witnesses.

Protest organizer Abdel Handi al-Azazi said that the high turnout for yesterday’s demonstrations sent a clear message to Saleh that “you will not return to the country whatever you do.’’

Azazi said if Saleh does indeed return, the protest movement will push to have him put on trial.

“We want to see Saleh in cage, to be the second Arab president to be tried by his own people,’’ he said.

The former Egyptian president, Hosni Mubarak, who was toppled by a popular uprising in February, went on trial earlier this month in Cairo.

Since Saleh left Yemen, the country has been in limbo, with both the protesters demands and the question of who will succeed Saleh unresolved. The United States and Saudi Arabia have pressured Saleh to remain in Riyadh since his return is likely to spark renewed violence.

Yemen’s opposition parties and the country’s most powerful tribal confederation have endorsed a US backed power-transfer deal which would give Saleh immunity from prosecution if he steps down.

On Thursday, Saleh told his top officials in a meeting in Riyadh that he objects to key issues in the deal and has made ambiguous demands for changes.

Prodemocracy youth groups and protesters however reject the deal and demand prosecution of Saleh and his regime members.

Meanwhile, in Egypt yesterday, hundreds of protesters rallied in Cairo’s Tahrir Square, briefly scuffling with riot police and defying Egypt’s military rulers who are eager to prevent any demonstrations in the iconic square since forcefully clearing a weekslong sit-in by youth activists last week.

Protesters briefly threw bottles and stones at the columns of police in riot gear before other demonstrators formed a human chain in front of the police to stop the violence. Many were chanting: “The people want Tahrir Square back.’’

Yesterday’s rally was planned by youth activists and Sufis, a mystical order of Islam that has generally stayed out of politics, as a counterpoint to a mass demonstration by hard-line Salafi Muslims last month who called for the imposition of Islamic law.