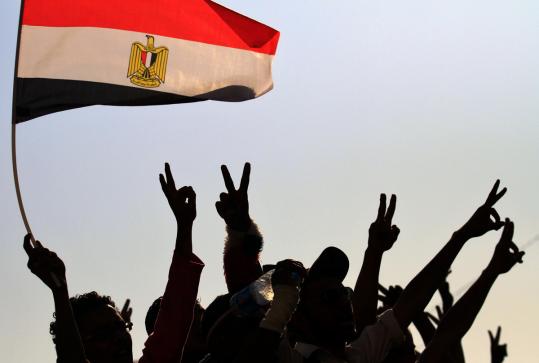 Even in its reincarnation six months after Mubarak’s ouster, Tahrir Square in Cairo has kept the ebullience of that victory. (Khalil Hamra/Associated Press)
By Leila Fadel and Sulafeh Munzir el-Shami Washington Post / July 13, 2011

CAIRO - Egypt’s military leaders went on the defensive yesterday, saying that they would not allow the disruption of public life or the “hijacking’’ of their authority as they called on Egyptians to disavow protests that disturb daily routines.

The statement was the first since tens of thousands of Egyptians had returned to Tahrir Square on Friday - the center of the 18-day uprising that forced Hosni Mubarak from office - and vowed to remain until their demands for change and justice were met.

“The armed forces . . . call upon the noble citizens to stand against all the protests that impede the return of normal life to the sons of our great people,’’ said the statement, which was read on television by Major General Mohsen El-Fangary. “The necessary measures will be taken to confront threats that surround the homeland and affect the citizens and national security.’’

The statement, which included a promise to form an assembly to draw up a constitution, underscored the Supreme Council of the Armed Forces’ support for Prime Minister Essam Sharaf.

Protesters received the statement with derision, reflecting the deepening divide between the military generals who took control of the country during the uprising last winter and the Egyptians who are growing frustrated with a slumping economy, rising unemployment, and the slow pace of trials for Mubarak-era officials and police officers accused of corruption and brutality.

“From the square, from the square, we reject this statement,’’ people chanted as thousands made their way to the Cabinet building to call for Sharaf’s immediate resignation.

“The country is sitting on a barrel of gunpowder,’’ said Hossam El-Hamalawy, an activist and influential blogger. “The point of confrontation is getting closer and closer.’’

Since protests were revived Friday, the Egyptian leaders have showered the nation with statements and pledges of reform. In the past week, Sharaf has promised a reshuffling of his Cabinet and a deadline of Friday for the purging of the Interior Ministry. Yesterday, the deputy prime minister, Yahia Gamal, resigned, according to the Cabinet website.

But many Egyptians say those steps are not enough. Although Mubarak is gone, they say, the judicial and security apparatuses, which form the backbone of his government, are unchanged. The council’s response yesterday showed that the military is resorting to the Mubarak-era tactic of painting protesters as security threats, protesters said.

“They’re saying we’re thugs so they have an excuse to attack the square,’’ said Alaa Hawaray, 23. Hundreds of Egyptians are sleeping in Tahrir Square each night in tents erected on the grassy knoll of a traffic circle.

Lilian Wagdy, an activist and blogger in the square, said that if the military does not respond to the demands for quicker trials, an end to hasty military tribunals that have convicted 7,000 civilians and justice for police officers involved in killing nearly 900 protesters, demands will soon follow for the council’s ouster.

“If they’re not met, we’re going to take it to the next level and ask the military to go back to their barracks,’’ she said.

At a tense afternoon news conference, military leaders said they would consider “legitimate’’ demands and protect freedom of expression and free assembly, but not at the expense of public order.