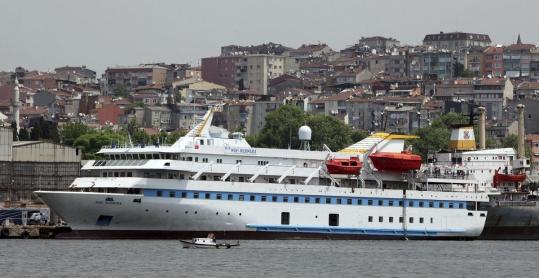 ISTANBUL — A Turkish boat that became an international symbol of anti-Israeli activism has dropped out of a Gaza-bound flotilla that plans to set sail for the Palestinian territory at the end of this month, organizers said yesterday.

The withdrawal of the Mavi Marmara ferry from the convoy — which aims to break Israel’s sea blockade of the Gaza Strip — removes a potential flashpoint for confrontation.

Last year, nine activists died in a botched Israeli commando operation on the Turkish ship in a similar flotilla, with each side accusing the other of starting the violence.

Israel has warned that it will not allow any more ships to break its naval blockade and said without providing details that security forces have adopted new tactics since last year’s raid in an effort to limit casualties.

IHH, the Islamic aid group in Turkey that refitted the Mavi Marmara after Israel returned it following the raid, said technical problems prevented it from joining 10 other ships that will head for Gaza from European ports on June 25. The original plan was to sail around the first anniversary of the Israeli raid before dawn on May 31, 2010.

“We did not want the flotilla to be postponed again,’’ IHH president Bulent Yildirim said. “When we fix the Mavi Marmara, our journey will continue. I hope it will not take a long time.’’

Organizers said their decision to exclude the Turkish boat was not a response to appeals from any government.