In Yemen, US ramps up covert strikes 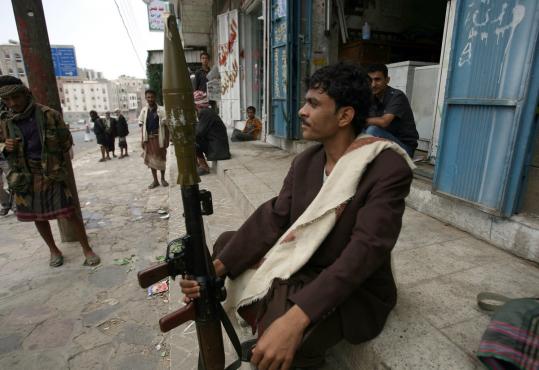 WASHINGTON — The Obama administration has intensified the US covert war against Al Qaeda in Yemen, exploiting a growing power vacuum in the country to strike at militant suspects with armed drones and fighter jets, according to US officials.

The acceleration of the US campaign in recent weeks comes amid a violent conflict in Yemen that has left the government in Sana, a US ally, struggling to cling to power. Yemeni troops that had been battling militants linked to Al Qaeda in the south have been pulled back to the capital, and US officials see the strikes as one of the few options to keep the militants from consolidating power.

On Friday, US jets killed Abu Ali al-Harithi, a midlevel Al Qaeda operative, and several other militant suspects in a strike in southern Yemen. According to witnesses, four civilians were also killed in the airstrike. Weeks earlier, drone aircraft fired missiles aimed at Anwar al-Awlaki, the radical American-born cleric who the US government has tried to kill for more than a year. Al-Awlaki survived.

The recent operations follow a nearly yearlong pause in US airstrikes, which were halted amid concerns that poor intelligence had led to bungled missions and civilian deaths that were undercutting the goals of the secret campaign.

Officials in Washington said that the US and Saudi spy services had been receiving more information — from electronic eavesdropping and informants — about the possible locations of militants. But, they added, the outbreak of the wider conflict in Yemen created a new risk: that one faction might feed information to the Americans that could trigger airstrikes against a rival group.

A senior Pentagon official, speaking on condition of anonymity, said yesterday that using force against militants in Yemen was further complicated by Al Qaeda operatives having mingled with other rebels and antigovernment militants, making it harder for the United States to attack without the appearance of picking sides.

The US campaign in Yemen is led by the Pentagon’s Joint Special Operations Command and is closely coordinated with the CIA.

Concerned that support for the campaign could wane if the government of Yemen’s authoritarian president, Ali Abdullah Saleh, were to fall, the US ambassador in Yemen has met recently with leaders of the opposition, partly to make the case for continuing US operations. Officials in Washington said that opposition leaders have told the ambassador, Gerald M. Feierstein, that operations against Al Qaeda in the Arabian Peninsula should continue regardless of who wins the power struggle in Sanaa.

The extent of America’s war in Yemen has been among the Obama administration’s closely guarded secrets, as officials worried that news of unilateral US operations could undermine Saleh’s tenuous grip on power. Saleh authorized US missions in Yemen in 2009 but limited their scope and has said publicly that all military operations had been conducted by his own troops.

Saleh fled the country last week to seek medical treatment in Saudi Arabia after a rebel shelling of the presidential compound, and more government troops have been brought back to Sanaa to bolster the government’s defense.

“We’ve seen the regime move its assets away from counterterrorism and toward its own survival,’’ said Christopher Boucek, a Yemen expert at the Carnegie Endowment for International Peace. “But as things get more and more chaotic in Yemen, the space for the Americans to operate in gets bigger.’’