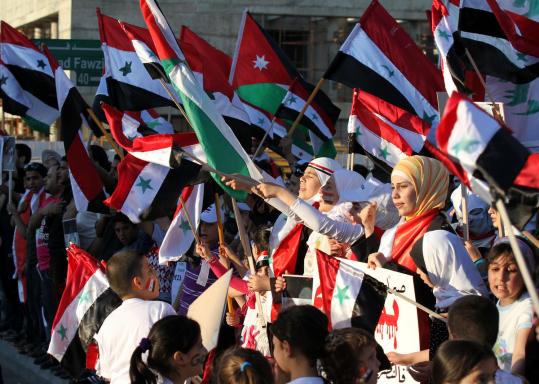 BEIRUT — The images grow no less shocking with time — a gaping wound on a tiny skull, the hair matted with blood; a gunshot that pierced a small torso; and finally, the broken neck and mangled body of a 13-year-old boy.

The images of children killed in a government crackdown on protests are circulating widely on YouTube, Al Jazeera, Facebook, and opposition websites. And they are stoking even more fury against a regime the opposition says has lost all legitimacy.

Syria’s government tried to blunt the anger with promises yesterday to investigate the killing of 13-year-old Hamza al-Khatib, whose tortured and mutilated body turned him into a symbol of the Syrian uprising.

But protesters deride that and other government concessions, including an amnesty that freed political prisoners yesterday and a committee to prepare for national dialogue, as nothing more than a ploy to buy time for President Bashar Assad. They say at least 25 children are among more than 1,000 dead, with government crackdowns that increase the toll almost daily.

The deaths of two girls — a 12-year-old killed Saturday when her school bus came under fire, and an 11-year-old shot to death Tuesday while her town was being shelled — appeared certain to inflame tensions. Already, a Syrian opposition page refers to the older girl, Hajar Tayseer al-Khatib, as “the flower of Syria’s martyrs.’’

Military operations in southern and central Syria killed at least 33 people Tuesday and yesterday, even as the government released hundreds of political prisoners. The government claims the revolt is the work of Islamic extremists and armed gangs.

Rami Abdul-Rahman, director of the Syrian Observatory for Human Rights, said more than 500 prisoners were freed, including some who took part in the latest demonstrations marking the most serious challenge to the Assad family’s 40-year rule. Activists say 10,000 have been rounded up since the protests began in mid-March.

Syrian state television on Tuesday said the amnesty covered “all members of political movements,’’ including the outlawed Muslim Brotherhood, which led an armed uprising against Assad’s father in 1982. Membership in the party is punishable by death.

Both the United States and France said the amnesty would not be enough.

“We need to see all political prisoners released, and we need to see an end to the violence that Syrian forces have been continually carrying out against civilian populations,’’ State Department spokesman Mark Toner said in Washington.

“The gesture of releasing a hundred or so political prisoners doesn’t go far enough, and I think that the Syrian people would feel that way,’’ he said.

Toner said the US ambassador to Syria, Robert Ford, met Tuesday with Syrian officials and raised the administration’s concerns over the crackdown, but he declined to elaborate.

In Paris, French Foreign Minister Alain Juppe told the France Culture radio station that Syrian authorities must be “much clearer, much more ambitious, much bolder than a simple amnesty.’’

And in Syria, anger over the children’s deaths appeared unlikely to abate.

Leading Facebook page The Syrian Revolution 2011 addressed the regime directly in a posting: “Why do you hate our children. They are the symbol of our revolution. They are our freedom and the future of our country.’’

Many of the dead children were from the southern province of Daraa, where the uprising was touched off by the arrest of 15 teenagers who scrawled antiregime graffiti on the walls of the provincial capital. At the time, those teens became the symbol of the new revolt inspired by the toppling of regimes in Egypt and Tunisia.

Hamza, the 13-year-old boy, has become a new emblem of the uprising and thousands of people now carry his smiling photo during protests or post it on their Facebook profile. A Facebook page set in his memory has more than 66,000 fans.

State television aired an interview late Tuesday with Dr. Akram Shaar, who examined Hamza’s body. He said the cause of the death was shooting, and three bullets had hit the boy’s body. He added that what appeared to be bruises and signs of torture were the result of natural decomposition since the boy died on April 29. His body was handed over to his family on May 21, state TV said.

The station also aired a recorded interview with Hamza’s father who said he was received by Assad this week.

The father added that the president considers “Hamza as his son and was touched’’ by the death.