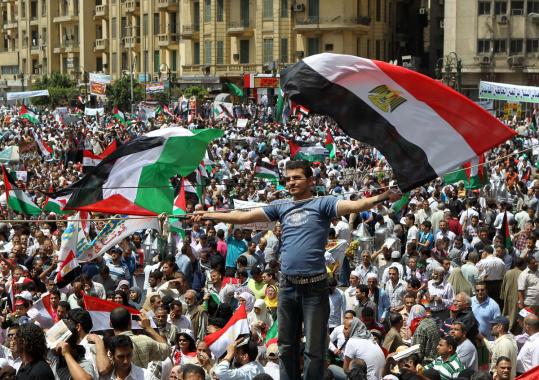 BEIRUT — The revolutions and revolts in the Arab world, playing out in just a few months across two continents, have proved so inspirational to so many because they offer a new sense of national identity built on the idea of citizenship.

But in the past weeks, the specter of divisions — religion in Egypt, fundamentalism in Tunisia, sect in Syria and Bahrain, clan in Libya — has threatened uprisings that once seemed to promise to resolve questions that have vexed the Arab world since the era of colonialism.

From the fetid alleys of Imbaba, the Cairo neighborhood where Muslims and Christians fought street battles, to the Syrian countryside, where a particularly deadly crackdown raised fears of sectarian score-settling, the question of identity may help determine whether the Arab Spring flowers or withers. Can the revolts find an alternative to cope with the Arab world’s variety of clans, sects, ethnicities, and religions?

The old examples have been largely of failure: a strongman’s rule in Egypt, Syria, Libya, and Yemen; a fragile equilibrium of fractious communities in Lebanon and Iraq; the repressive paternalism of the Persian Gulf, where oil revenues are used to buy loyalty.

“I think the revolutions in a way, in a distant way, are hoping to retrieve’’ this sense of national identity, said Sadiq al-Azm, a prominent Syrian intellectual living in Beirut.

“The costs otherwise would be disintegration, strife, and civil war,’’ Azm said. “And this was very clear in Iraq.’’

In an arc of revolts and revolution, that idea of broader citizenship is being tested as the enforced silence of repression gives way to the cacophony of diversity. Security and stability were the justification that strongmen in the Arab world offered for repression, often with the sanction of the United States; the essence of the protests in the Arab Spring is that people can imagine an alternative.

But even activists admit that the region so far has no model that enshrines diversity and tolerance without breaking down along more divisive identities.

In Tunisia, a relatively homogenous country with a well-educated population, fault lines have emerged between the secular-minded coasts and the more religious and traditional inland areas.

In Cairo, the sense of national identity that surged at the moment of revolution — when hundreds of thousands of people of all faiths celebrated in Tahrir Square with chants of “Hold your head high, you are an Egyptian’’ — has given way to a week of religious violence pitting the Coptic Christian minority against Muslim neighbors, reflecting long-smoldering tensions that an authoritarian state may have muted, or let fester.

At a rally this month in Tahrir Square to call for unity, Coptic Christians were conspicuously absent, thousands of them gathering nearby for a rally of their own. And even among some Muslims at the unity rally, suspicions were pronounced.

In Libya, supporters of Moammar Khadafy acknowledge that his government banks on fears of clan rivalries and possible partition to stay in power in a country with deep regional differences.

Officials say that the extended clans of the west who contribute most of Khadafy’s soldiers will never accept any revolution arising from the east.

“Fear’’ is what Gamal Abdel Gawad, director of the Ahram Center for Political and Strategic Studies in Cairo, called it — the way that autocrats win support because people “are even more scared of their fellow citizens.’’

Nowhere is that perhaps truer than in Syria, with a revolt against rule by one family and a worsening of tension between a Sunni Muslim majority and minorities of Christians and heterodox Muslims, the Alawites.

Mohsen, a young Alawite in Syria, recounted a slogan that he believes, rightly or not, was chanted at some of the protests there: “Christians to Beirut and the Alawites to the coffin.’’

“Every week that passes,’’ he lamented, “the worse the sectarian feelings get.’’

The example of Iraq comes up often in conversations in Damascus, as does the civil war in Lebanon. The departure of Jews, who once formed a vibrant community in Syria, is part of the collective memory, illustrating the tenuousness of diversity. Syria’s ostensibly secular government, having always relied on Alawite strength, denounces the prospect of sectarian differences while, its critics say, fanning the flames. The oft-voiced formula is familiar: after us, the deluge.

That he used the mantra of years of Arab authoritarianism suggested that people still, in the words of one human rights activist, remain “hostage to the lack of possibilities’’ in states that have failed to come up with a sense of self that transcends the divides.

“It was either our martial law or the martial law of the Islamists,’’ he added. “The third option was to divide the country into ethnicities, sects and so on.’’