Its anniversary is protested by Palestinians 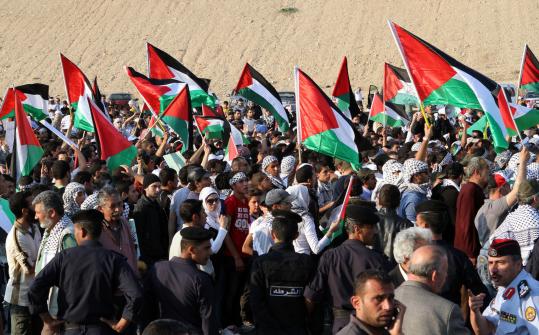 JERUSALEM — Israel’s borders erupted in deadly clashes yesterday as thousands of Palestinians — marching from Syria, Lebanon, Gaza, and the West Bank — confronted Israeli troops to mark the anniversary of Israel’s creation. At least 15 people were reported killed and scores injured.

With an unprecedented wave of coordinated protests, the popular uprisings that have swept the region for the first time touched Israel directly.

Like those other protests, plans for this one spread over social media, including Facebook, but there were also signs of official support in Lebanon and Syria, where analysts said leaders were using the Palestinian cause to deflect attention from internal problems.

At the Lebanese border, Israeli troops shot at hundreds of Palestinians trying to force their way across. The Lebanese military said 10 protesters were killed and more than 100 were wounded; Israel said it was investigating the casualty figures.

In the Golan Heights, about 100 Palestinians living in Syria breached a border fence and crowded into the village of Majdal Shams, waving Palestinian flags. Troops fired on the crowd, killing four of them.

In the West Bank, about 1,000 protesters carrying Palestinian flags and throwing stones and occasional firecrackers and Molotov cocktails tangled with Israeli riot troops near the military checkpoint between Ramallah and Israel. Scores were injured, local medical officials said.

In Gaza, when marchers crossed a security zone near the border, Israeli troops fired into the crowd. Palestinian medics said 125 people were wounded. Later, in a separate incident, an 18-year-old Gazan near another part of the border fence was shot and killed by Israeli troops when, the Israeli military says, he was trying to plant an explosive.

In Jordan and Egypt, protesters setting off for the border were thwarted by government security forces.

Every year in mid-May, many Palestinians mark what they call the nakba, or catastrophe, the anniversary of Israel’s declaration of independence in 1948 and the war in which hundreds of thousands of Palestinians lost their homes through expulsion and flight.

But this was the first year that Palestinian refugees and their supporters in Syria, Lebanon, Jordan and Egypt — inspired by the recent protests around the Arab world — tried to breach Israel’s military border from all sides.

“The Palestinians are not less rebellious than other Arab peoples,’’ said Ali Baraka, a Hamas representative in Lebanon.

At day’s end, as a tense calm returned to the country’s borders, Prime Minister Benjamin Netanyahu of Israel said the protests had been aimed at destroying Israel, not creating a Palestinian state alongside it.

“The leaders of these violent demonstrations, their struggle is not over the 1967 borders but over the very existence of Israel, which they describe as a catastrophe that must be resolved,’’ he said in a televised statement. “It is important that we look with open eyes at the reality.’’

Mahmoud Abbas, the president of the Palestinian authority, saluted the protesters in a televised speech, referring to the dead as martyrs. “The blood of the nakba fatalities was not spilled in vain,’’ he said. “They died for the Palestinian people’s rights and freedom.’’

Officials and analysts have argued that with peace talks broken down and plans for a request of the United Nations to declare Palestinian statehood in September, violence could return to define this conflict, which has been relatively quiet for the past two years.

Israel declared its independence on May 14, 1948. Israelis celebrate the anniversary according to the Hebrew calendar, which this year was last Tuesday.

In Gaza, the Hamas police stopped buses carrying protesters near the main crossing into Israel, but dozens of demonstrators continued on foot, arriving at a point closer to the Israeli border than they had reached in years and drawing Israeli fire.

At the Syrian border, an Israeli military spokesman said, troops fired only at infiltrators trying to damage the security barrier and equipment there. Some 13 Israeli soldiers were wounded from thrown rocks.

The chief Israeli military spokesman, Brigadier General Yoav Mordechai, said on Israel Radio that he saw Iran’s fingerprints in the coordinated confrontations although he offered no evidence.