Threat of regime collapse in Syria creates uncertainty in region 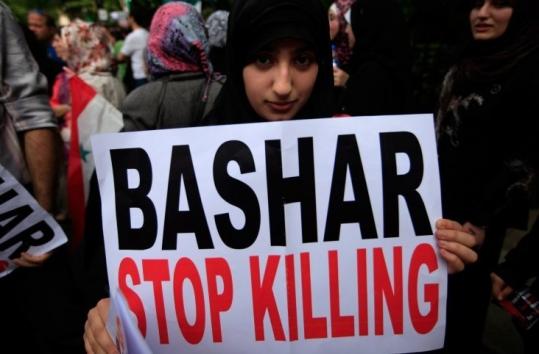 BEIRUT — The toppling of the presidents in Tunisia and Egypt precipitated a tumult of revolutionary fervor that promises to transform the Middle East, but the potential collapse of the Syrian regime could wreak havoc of a very different kind.

In Syria, the fall of President Bashar Assad would unleash a cataclysm of chaos, sectarian strife, and extremism that spreads far beyond its borders, threatening not only the entrenched rulers already battling to hold at bay a clamor for democratic change but also the entire balance of power in the volatile region, analysts say.

With Syria’s minority Shi’ite Alawite government overseeing a majority Sunni population, its strategic location and its web of alliances including the radical Hamas and Hezbollah movements, regime change could look a lot more like it did in Iraq than in Egypt — and the ramifications could prove even more profound.

“If the regime collapses you will have civil war and it will spread throughout the region,’’ engulfing Lebanon, Iraq, Saudi Arabia, and beyond, said Hilal Khashan, professor of political science at the American University of Beirut. “A collapse of the Syrian regime is a doomsday scenario for the entire Middle East.’’

Many believe that is why the international community, including the United States, has offered such a tempered response to the bloodshed in Syria. NATO warplanes are bombing Libya to protect civilians there, but there have been no calls even for Assad to step aside, despite an increasingly violent crackdown by the Syrian military.

Analyst Rami Khouri describes Syria as the Middle East equivalent of a bank that’s too big to be allowed to fail. “The spillover effect would be too horrible to contemplate,’’ he wrote in Beirut’s Daily Star.

Part of the problem is that so little is known about what would come next should Assad be ousted. Egypt and Tunisia took great leaps into uncertainty when their regimes fell, but in each case the army, a known quantity, asserted its independence and seized power to oversee the transition.

In Syria, the army is so tightly bound to Assad’s Alawite clan that the fall of the regime would almost certainly lead to its disintegration, setting the stage for an Iraq-style implosion in which the state collapses, a majority seeks to exact revenge on a minority, and regional powers pile in to assert their own interests, said Joshua Landis of the University of Oklahoma, who writes the blog Syria Comment.

“Syria is the cockpit of the Middle East, and a struggle for control of Syria would be ignited,’’ he said.

It is the specter of Iraq that most haunts the Obama administration as it seeks to balance demands for a firmer response to the bloodshed with America’s strategic interests, analysts say.

Syria shares a long desert border with Iraq that was for many years the chief transit point for Islamic extremists seeking to join the Sunni insurgency. Only recently, officials say, had the United States noted genuine efforts on the part of the Syrians to curtail the traffic, prompting the United States to return an ambassador to Syria in January for the first time since 2005.

“For the Obama administration, the last thing they want, just at the time they’re withdrawing from Iraq, is a destabilized Syria that would lead to open season for jihadis to cross the border into Iraq,’’ said David Lesch, a professor at Trinity University in Texas.

Iraq’s own Shi’ite government also views with alarm the upheaval across the border, mindful that the collapse of Syria’s Shi’ite minority government would almost certainly herald the rise of a Sunni state on its doorstep.

But Iraq is by no means the only country in the region looking askance at the upheaval. Israel has expressed misgivings about the tumult threatening its chief foe, which has not attempted to recover by force the occupied Golan Heights for nearly four decades — something that could change.

Neighboring Lebanon has its own Sunni-Shi’ite divide. They have fought each other in the recent past, and it is inconceivable that Syria’s troubles would not spill over the border into Lebanon, Khashan said.