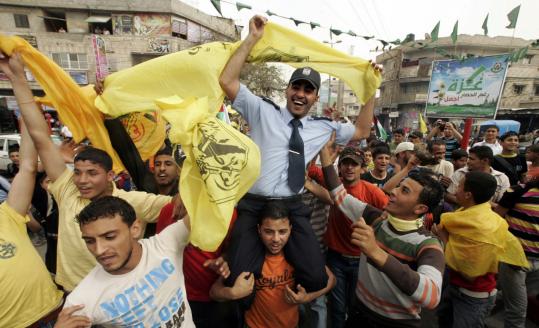 CAIRO — Rival Palestinian movements signed a historic reconciliation accord here yesterday vowing common cause against Israeli occupation, a product of shifting regional power relations and disillusionment with US peace efforts.

Mahmoud Abbas, the leader of the Fatah movement and — at least until now — a US ally, joined forces with Khaled Meshal, the Syria-based leader of Hamas, the Islamist group that rejects Israel’s existence and accepts arms and training from Iran.

At the signing ceremony inside Egypt’s intelligence headquarters, men from Abbas’s Palestinian Authority, which runs the West Bank, and from Hamas, which rules Gaza — who had for four years viewed one another as solemn enemies — embraced and even joked. But they also expressed steely mutual resolve.

“We will have one authority and one decision,’’ Meshal said. “We need to achieve the common goal: a Palestinian state with full sovereignty on the 1967 borders with Jerusalem as the capital, no settlers, and we will not give up the right of return.’’

The forces that produced this reconciliation deal are many — the changes in Egypt, the troubles of the government in Syria, the failure of peace negotiations with Israel, and Abbas’s plans to retire with a lasting legacy. But the efforts of Abbas to join hands with Hamas also underscore his determination to pursue Palestinian statehood unilaterally and his willingness to risk a major rupture with the United States and Israel.

Prime Minister Benjamin Netanyahu of Israel, visiting London, denounced the pact as “a tremendous blow to peace and a great victory for terrorism.’’ The Obama administration has been cautious, saying it needs more details. In a sign of declining relations, Abbas gave the administration no warning of the deal first publicized last week.

Much about the pact remains to be determined — how it will define resistance, whether the two sides’ militaries can be coordinated, and what happens to US and European aid. But it was agreed that a government of unaffiliated technocrats would prepare for elections across the West Bank and Gaza within a year.

In a sign of early change on the ground, Hamas’s television broadcasts were beamed for the first time into the West Bank and Palestinian Authority television into Gaza.

Yesterday, Abbas saluted Palestinian youngsters who had taken to the streets on March 15. Compared with other recent uprisings, that rally in Gaza City was small potatoes — 10,000 calling for unity between Hamas and Fatah.

But it was the biggest turnout for an unauthorized demonstration in four years of Hamas rule. It was an indication of rising public discontent, the first clear indication that the regional earthquake would not spare the Palestinians. From that moment, negotiations grew serious.

Hamas had rejected a very similar unity agreement signed by Fatah nearly two years ago but, in truth, that offer was halfhearted. Abbas, along with his allies, the old Egyptian government of Hosni Mubarak, the United States, and Israel, wanted Hamas to be seen as the problem. A negotiated peace deal, he believed, would force Hamas’s hand later.

The deal appeals to Hamas in part because it would remake the Palestine Liberation Organization, the overarching authority of Palestinian politics that now excludes Hamas. A committee to study changes will include the leaders of all the Palestinian factions — including Hamas — and could end up being the main power in the coming year.

The difficulties the two sides face in reconciling their conflicting ideologies will be great. For now, while a committee negotiates the future of security cooperation and prisoners, each side will police its area independently. The Palestinian Legislative Council, the parliament where Hamas won a majority in 2006 elections, will also be revived.

Hamas’s rising influence could well mean that the United States, which labels Hamas a terrorist group, could cut off hundreds of millions of dollars in aid to the Palestinians.