THIS STORY HAS BEEN FORMATTED FOR EASY PRINTING
WORLD REACTION 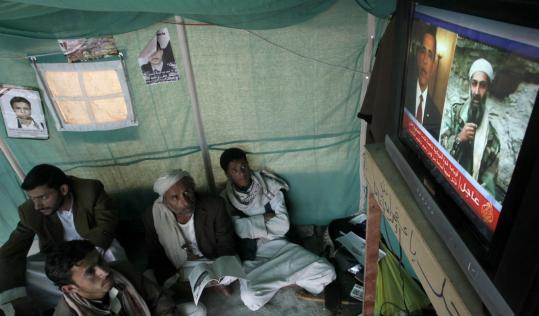 A group of men in Sana, Yemen, watched a report yesterday about the killing of Osama bin Laden in a Pakistan compound.
(Muhammed Muheisen/Associated Press)
By Deb Riechmann and Karl Ritter Associated Press / May 3, 2011

KABUL — News of Osama bin Laden’s death stirred strong, widely divergent emotions yesterday, from a profound sense of relief across much of the globe to outrage among sympathizers who vowed to avenge the Al Qaeda leader.

Most world leaders welcomed President Obama’s announcement of the helicopter raid on a compound in Pakistan, congratulating the United States for killing bin Laden or expressing satisfaction that the search for the world’s most wanted terrorist was over.

“This is the fate that evil killers deserve,’’ said outgoing Lebanese Prime Minister Saad Hariri, deploring the harm that bin Laden did to “the image of Islam and Arab causes.’’

French President Nicolas Sarkozy hailed “the tenacity of the United States’’ in its hunt for the sponsor of the Sept. 11 attacks, while Italian Premier Silvio Berlusconi called his death a “great result in the fight against evil.’’

Spontaneous, celebratory rallies broke out in New York City at ground zero, where the World Trade Center towers fell nearly 10 years ago, and outside the White House.

In Afghanistan, where bin Laden was given refuge by the country’s previous Taliban rulers, local officials erupted in applause when President Hamid Karzai told them the news.

“[His hands] were dipped in the blood of thousands and thousands of children, youths, and elders of Afghanistan,’’ Karzai told reporters, and repeated his claim that that the fight against terrorism should not be fought in Afghan villages, but across the border in hideouts in Pakistan where bin Laden was killed.

Others in the war-torn nation disagreed about bin Laden’s legacy.

“He was like a hero in the Muslim world,’’ said Sayed Jalal, a rickshaw driver in the eastern Afghan city of Jalalabad. “His struggle was always against non-Muslims and infidels, and against superpowers.’’

At the site of the 1998 bombing of the US Embassy in Kenya, a man who lost his eyesight in the attack prayed at a wall commemorating those killed.

“This is a day of great honor to the survivors and victims of terrorism in the world,’’ Douglas Sidialo said. “A day to remember those whose lives were changed forever.’’

But Brian Deegan, a lawyer from the southern Australian city of Adelaide, felt a “cold shiver’’ rather than relief when he heard on a car radio of bin Laden’s death. He lost his 21-year-old son, Josh, in Al Qaeda-linked bombings on the Indonesian resort island of Bali in 2002.

“I don’t gain any satisfaction in his death — nothing will bring Josh back to me,’’ Deegan said.

Those who followed or sympathized with bin Laden expressed shock and dismay, or vowed revenge.

“My heart is broken,’’ Mohebullah, a Taliban fighter-turned-farmer in eastern Afghanistan, said in a telephone interview. “In the past, we heard a lot of rumors about his death, but if he did die, it is a disaster and a black day.’’

A top Al Qaeda ideologue going by the online name Assad al-Jihad2 posted a long eulogy for bin Laden on extremist websites and promised to “avenge the killing of the Sheik of Islam.’’

A former sister-in-law of bin Laden, Swiss-born Carmen Binladin, said he would have wanted to die “rather than face justice in an American court.’’

She said his family in Saudi Arabia will have received the news of his death with “a great sense of sadness.’’

In Israel, Prime Minister Benjamin Netanyahu called bin Laden’s death “a resounding victory for justice, for freedom, and for the shared values of all democratic countries that fight shoulder to shoulder against terror.’’

The leader of the Palestinian militant Hamas government in Gaza, Ismail Haniyeh, condemned the killing, saying the operation marked “the continuation of the American oppression and shedding of blood of Muslims and Arabs.’’

In Iraq, the former epicenter for Al Qaeda’s war against the United States, both Shi’ite and Sunni civilians celebrated bin Laden’s death.

“The crimes committed by Al Qaeda against the Iraqi people, as well as other people all over the world, shows that this terrorist group poses a clear danger to the world’s security,’’ Iraqi government spokesman Ali al-Dabbagh said.

“We are very happy to hear about the killing of the boss of terrorism in the world,’’ said Mardin Yalda, 45, who survived the horrific siege. “During his life, bin Laden was the source of suffering and agony for many innocent people, whether Christians or Muslims.’’