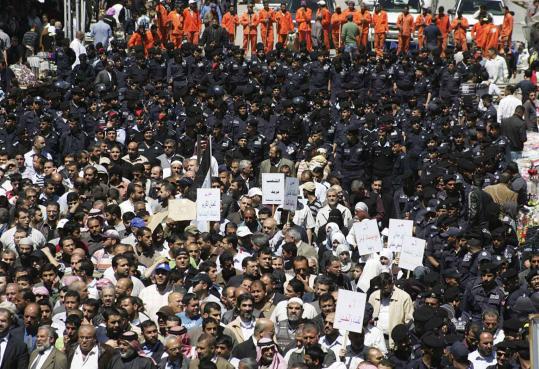 BEIRUT — Syrian riot police clashed with protesters in Damascus yesterday, firing tear gas and beating people with batons, while other demonstrations erupted across the country in a marked expansion of a month-long wave of unrest, witnesses said.

Shouting, “Freedom! Freedom!’’ and “National unity, Muslims and Christians,’’ a large crowd marched toward al-Abbasiyeen Square in northern Damascus, where police were blocking access late in the afternoon, witnesses said.

It was the largest day of demonstrations since the uprising here began in mid-March, according to Syrian activists reached via the online Skype service. Activists said up to 100,000 people joined the Damascus march, which began in Douma, outside the city, and picked up more participants as it passed through Harasta, Irbin, Zamalka, and Jobar en route to the capital.

It was impossible to independently confirm the number of protesters because foreign news media have been restricted from reporting in Syria.

Protests also took place yesterday in other cities across the country, including Homs, Latakia, Daraa, Baniyas, and Jassan, as well as in Syria’s Kurdish region, according to activists, who said government forces fired at protesters in Latakia, a city on the coast.

The movement in Syria has been marked by swelling protests and fierce crackdowns by state security forces, who have opened fire on crowds and arrested people en masse.

In recent days, in the most recent of a string of apparent attempts to placate protesters, the government released many of the detainees, and on Thursday it announced a new Cabinet.

Yesterday, the Muslim day of prayer, had been widely anticipated as an indicator of whether the opposition movement would subside or continue to gain steam.

“Today is the biggest ever since it started,’’ said Razan Zaitouneh, a human rights activist and lawyer who was near the square during the protests. “It means that people didn’t respond to the violence of the authorities.’’

Yemen SANA — More than 100,000 demonstrators returned to the streets of the Yemeni capital yesterday, some chanting for President Ali Abdullah Saleh and, about 2 miles away, many chanting against.

In what has become a weekly ritual, Saleh delivered a speech in front of tens of thousands of supporters following midday prayers.

Many carried banners with pro-Saleh slogans or slurs against the political opposition and Al Jazeera, the satellite news channel. Others climbed to the top of flagpoles and waved Saleh posters.

There were clashes reported in the central city of Taiz between plainclothes government supporters and protesters. More than a dozen protesters were injured by thrown rocks and daggers, according to a local doctor.

By contrast, the opposing demonstrations in the capital took on a more relaxed — at times, even jovial — feel, a month after government-linked snipers opened fire on antigovernment protesters here, killing 52 people.

The military was notably less present on the streets yesterday than it was in previous weeks.

Even Saleh appeared less defiant, focusing on how, as he put it, the masses “come to these squares to say yes to the constitutional legitimacy, yes to freedom and democracy, yes to Ali Abdullah Saleh, president of this nation.’’

Jordan ZARQA — Hundreds of protesting Islamic hard-liners clashed with supporters of Jordan’s king yesterday, wounding dozens, in the latest move by the extremist movement to assert itself amid the country’s wave of antigovernment demonstrations.

A crowd of about 350 extremist Salafi Muslims faced off with a slightly smaller group of king loyalists in the town of Zarqa. Salafis beat the government supporters with clubs and fists, and the two sides hurled stones at each other, leaving people bloodied on the ground.

The Salafi movement — an ultraconservative version of Islam with an ideology similar to Al Qaeda’s — is banned in Jordan, but it has grown in strength in recent years. Salafis have held a series of rallies in various parts of the country in recent weeks.

Their demonstrations are separate from the 14-week-old wave of antigovernment protests by leftists and more moderate Islamists demanding democratic reforms in the Arab US ally.

Egypt CAIRO — Egypt’s top prosecutor yesterday ordered deposed President Hosni Mubarak to be moved from a hospital at a Red Sea resort to a military hospital for questioning about the deaths of protesters and allegations of corruption and abuse of power.

Prosecutor General Abdel Maguid Mahmoud did not name the hospital in his announcement, but the Armed Forces International Center, 25 miles north of Cairo, is known to be one of Egypt’s best hospitals. Reporters noticed an unusual number of guards there.

Since his Feb. 11 ouster, Mubarak and members of his family have been under house arrest at their compound in the Red Sea resort of Sharm el-Sheikh.

The 82-year-old Mubarak was taken to a hospital there for unspecified heart problems on Tuesday, the day his questioning began.