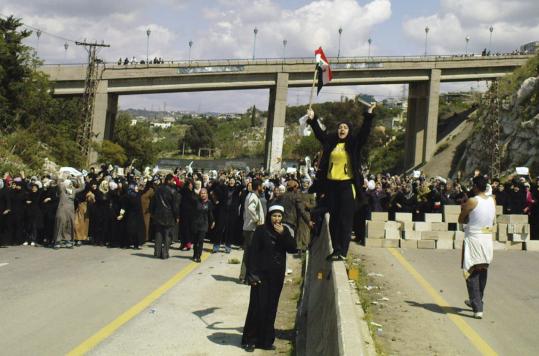 Thousands of women and children holding white flags and olive branches blocked a highway yesterday in Banias, Syria, demanding the release of men who were rounded up in recent days. (Associated Press)
By Zeina Karam Associated Press / April 14, 2011

BEIRUT — Women, children, and students took to the streets in Syria yesterday, lending their voices to a monthlong uprising that President Bashar Assad insists is the work of a foreign conspiracy.

The protest movement is posing an increasing threat to Assad’s iron rule as it attracts an ever-wider following, with tens of thousands of people demanding political freedoms and an end to the decades-old emergency laws that extend state authority into nearly all aspects of Syrians’ lives.

“We will not be humiliated!’’ shouted some 2,000 women and children who blocked a main coastal road in northeastern Syria, where security forces and progovernment gunmen have cracked down on dissent in recent days. The protesters were demanding the release of hundreds of men who have been rounded up in the villages of Bayda and Beit Jnad.

“Yesterday they raided our home in Bayda and took away my father,’’ said one of the protesters, a 21-year-old woman. “I’m not leaving here until they return him to us.’’

In an apparent attempt to calm the women’s demonstration, authorities released about 100 of the detainees and paraded them in front of the protesters, prompting cheers and cries of triumph, a witness said. Some of the men were bruised and appeared to have broken bones, witnesses said.

Residents and activists said hundreds of men, young and old, were arrested Tuesday when security forces attacked the villages in northeastern Syria in a move to crush growing dissent there.

Witness accounts suggest an expansion of the protests, with a broader cross-section of society joining in.

“These developments are very significant because they underline a number of elements which have propelled the revolutions that we have witnessed in Tunisia and Egypt,’’ said Anthony Skinner, an analyst at Maplecroft, a risk analysis company.

Assad blames the violence on a foreign conspiracy and armed gangs. But he also has made overtures to try to ease growing outrage — including dismissing his Cabinet, firing local officials, and granting Syrian nationality to thousands of Kurds, a long-ostracized minority.

In Yemen yesterday, gunmen loyal to the government attacked the forces of the president’s chief rival in the northern capital of Sana, killing one person and raising fears that Yemen’s weeks of popular unrest could evolve into pitched battles between factions of the divided military.

State media described the attack as a case of the government’s rapid response forces quelling a “provocative action’’ by Major General Ali Mohsen al-Ahmar, the commander of the First Armored Division.

Yemen’s military split on March 17, when Ahmar, President Ali Abdullah Saleh’s chief competitor for power, declared his solidarity with the protesters who have been demonstrating for weeks calling for the president’s ouster.

Until the incident early yesterday, there had been no clashes.

Yemen has been wracked by protests over the country’s lack of freedoms and its extreme poverty. More than 120 people have been killed since the uprising began on Feb. 11.

In the southern capital of Aden, security forces clashed yesterday with thousands of protesters who hurled rocks and burned tires, killing at least one person.