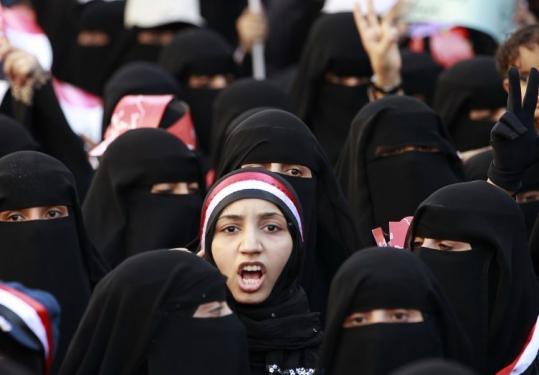 CAIRO — The security crackdown on Syria’s coastal region tightened yesterday, with checkpoints blocking off access to the city of Baniyas and its outlying areas and a violent raid by government security forces on the nearby village of Bayda, local human rights advocates said.

On Sunday, four protesters were killed by state security forces during prodemocracy demonstrations in Baniyas, a port city known for orchards and its large oil refinery. On Monday, an eyewitness told Al-Arabiya news channel that shooting continued to be heard in the city’s Al-Nabe’a district, where the biggest clashes between protesters and security forces took place Sunday.

The village of Bayda was being punished for offering refuge to people fleeing Baniyas, and because residents were rumored to be planning a protest, said Wissam Tarif, a Syrian human rights advocate. He said security forces had raided houses and pulled men and women into the town square, where they were “collectively beaten’’ by security agents.

“They formed circles around them in the square, and they beat them,’’ Tarif said.

His organization, Insan, has confirmed one death in Bayda and was told of two more in Baniyas, which he said it had been unable to confirm.

Razan Zeitouneh, a Damascus-based human rights advocate, said in an e-mail that her sources backed up Tarif’s account and added there was mounting anxiety in Baniyas about another assault.

“Baniyas is still surrounded by army and security,’’ Zeitouneh wrote. “There is fear that it will be attacked this night.’’

Several hours after sending the e-mail, Zeitouneh, who has routinely used Facebook to publicize the findings of her organization, the Syrian Human Rights Information Link, began posting what she said were eyewitness accounts of nighttime attacks.

“Heavy shooting at the southern entrance of Baniyas now,’’ read one post. “Finishing invasion of the orchards and arresting tens, and starting to invade the neighborhoods of al-Basyia and al-Oudima,’’ read another.

Syria’s state-run news agency, SANA, has remained mostly silent about the events in and around Baniyas, reporting only on what it said were the killings of nine Syrian soldiers “at the criminal hands of a group of terrorists and thugs’’ on Sunday. Some members of the Syrian opposition have alleged the soldiers were killed by security forces for refusing to fire at protesters.

Organizers had dubbed the protest “the April 12 Uprising,’’ recalling the day, 38 years ago, when King Sobhuza II abandoned the constitution and rid himself of political parties.

His son, Mswati III, is now king. There is again a constitution, although it does not assure political freedom.

Yesterday, police arrested trade unionists who planned to lead the rally, then used blunt tactics to disperse the crowd.

In a sign that his ailment might not be very serious, however, Justice Minister Mohammed el-Guindi said Mubarak was questioned in the hospital.

Mubarak, 82, was deposed Feb. 11 after 18 days of protests and has been under house arrest in the Red Sea resort of Sharm el-Sheikh for the last two months. The public prosecutor said Monday he was under investigation.

Guindi said Mubarak was being investigated over his role in the violence against protesters during the uprising in which more than 800 people died. The investigation into corruption charges would be carried out later by the Justice Ministry’s anticorruption department, he said.

And a police general said today that Mubarak’s two sons have been detained to investigate their role in violence against protesters and corruption.

Yemen SANA — Tens of thousands of Yemenis demonstrated across the country yesterday against a mediation proposal by neighboring Persian Gulf nations because it offers the president immunity from prosecution.

Protesters in the capital, Sana, carried flowers for security forces and swore they were ready to die as they repeated their two-month-old call for Yemen’s president to leave office after 32 years.

Yemen has been wracked by protests since mid-February demanding Ali Abdullah Saleh resign because of the country’s lack of freedoms and extreme poverty. In the ensuing crackdown, 120 people have been killed.

The six-nation Gulf Cooperation Council offered its own proposal Sunday to end the unrest and called on Saleh to transfer power to his deputy as part of a deal with the opposition.

The deal did not specify a time frame, and included immunity for Saleh and his family.