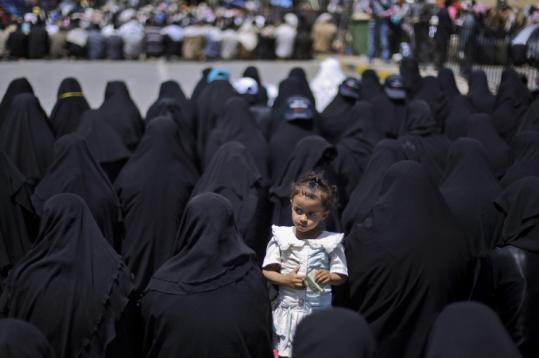 SANA, Yemen — A top military officer and at least 18 other senior commanders defected yesterday to the opposition movement demanding the immediate ouster of Yemen’s embattled president, depriving the US-allied ruler of most of his fast-dwindling power base.

The looming collapse of President Ali Abdullah Saleh’s regime throws into doubt the American campaign against a major Al Qaeda wing that plotted attacks in the United States.

The defections led to rival tanks being deployed in the streets of Yemen’s capital, Sana, creating a potentially explosive situation and prompting Saleh’s defense minister, Mohammed Nasser Ahmed, to announce the military remained loyal to the longtime leader.

The armed forces will counter any plots against the government, Ahmed declared on state television, after a meeting of the National Defense Council, which is led by Saleh and includes Ahmed, the prime minister and the intelligence chief.

The defection of Major General Ali Mohsen al-Ahmar, a longtime Saleh confidante and commander of the army’s First Armored Division, was seen by some as a turning point. It followed a major escalation in the regime’s crackdown on demonstrators, when more than 40 people were killed in bloody clashes Friday.

The French foreign minister, Alain Juppe, called Saleh’s resignation unavoidable and pledged “support to all those that fight for democracy.’’

Tanks, armored vehicles, and soldiers directed by Ahmar fanned out around the Sana square that has become the epicenter of the opposition movement, moving in for the first time to protect demonstrators.

Ahmar also sent tanks to the state television building, the Central Bank and the Defense Ministry. In response, at least a dozen tanks and armored personnel carriers belonging to the Republican Guards, an elite force led by Saleh’s son, were deployed outside the presidential palace on Sana’s southern outskirts.

The deployment of Ahmar’s troops in Sana was greeted by wild jubilation from protesters, many of whom posed with soldiers for photographs, greeted them with military style salutes or offered them roses.

Syria
Syrians chanting “No more fear!’’ held a defiant march yesterday after a deadly government crackdown failed to quash three days of mass protests in a southern city — an extraordinary outpouring in a country that is known for brutally suppressing dissent.

Riot police armed with clubs chased the small group away without casualties, but traces of earlier, larger demonstrations were everywhere: burned-out and looted government buildings, a dozen torched vehicles, an office of the ruling Ba’ath party with its windows knocked out. Protesters also burned an office of the telecommunications company Syriatel, which is owned in part by the president’s cousin.

The unrest in the city of Daraa started Friday after security troops fired at protesters, killing five people. Over the next two days, two more people died and authorities sealed the city, allowing people out but not in, as thousands of enraged protesters set fire to government buildings and demonstrated around the city.

Among the victims was Mundhir Masalmi, an 11-year-old who died Monday after suffering tear gas inhalation a day earlier, an activist said.

Tommy Vietor, a spokesman for the US National Security Council, said yesterday that reports indicate the Syrian government “has used disproportionate force against civilians, and in particular against demonstrators and mourners in Daraa.’’ Human Rights Watch said Syria should “cease use of live fire and other excessive force against protesters.’’

Bahrain
Bahrain’s king blamed a foreign plot for his nation’s weeks-long unrest, using veiled language yesterday to accuse Iran of fomenting an uprising by the Shi’ite majority in the Sunni-ruled island kingdom.

The Bahrain opposition’s main demand is for a constitutional monarchy that would keep the royal family in power but would let people elect a government. Inspired by mass protests in Tunisia and Egypt that toppled the two countries’ presidents, it rejects accusations of influence by the Shi’ite powerhouse across the Persian Gulf.

“We don’t want Iranians to come. We don’t want a big problem in this small country,’’ senior opposition leader Ali Salman said Sunday, adding that the solution to the country’s crisis has to come from its people.

The king declared a three-month emergency rule and invited armies from Saudi Arabia, the United Arab Emirates, and other Sunni-ruled Gulf states to help quell unrest in Bahrain, the home of US Navy’s Fifth Fleet.

Iran has condemned the presence of the Gulf force in Bahrain and Shi’ites across the Middle East have been outraged by the deadly crackdown of protest that has killed at least 13 people.