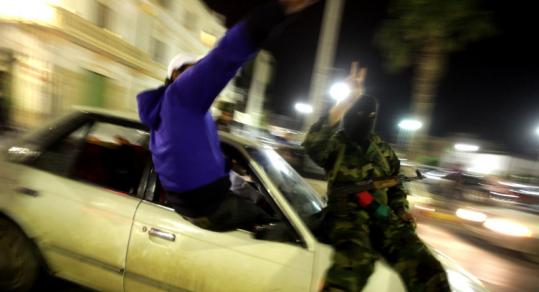 NEW YORK — The United Nations last night authorized the use of “all necessary measures’’ to protect civilians in Libya, opening the door to air and naval attacks against the forces of leader Moammar Khadafy as he vowed to level the city of Benghazi, the last major rebel stronghold.

In a 10-0 vote, with five abstentions, the Security Council called for an immediate cease-fire in Libya and approved establishment of a no-fly zone over Libyan territory and the interdiction of ships carrying supplies to Khadafy’s government. In broad language, the council approved the use of any means short of “foreign occupation’’ to end attacks against “civilian populated areas under threat of attack . . . including Benghazi.’’

The vote marked a dramatic turn in the world’s response to the Libyan crisis after weeks of debate and reluctance by many — including the United States — to intervene. The resolution also comes as rebel forces were reportedly on the brink of defeat.

Celebrations erupted across Benghazi as word of the vote reached the rebels. Clerics chanted “God is great’’ over mosque loudspeakers, and the streets were filled with celebratory gunfire and people waving the pre-Khadafy Libyan flag adopted by the rebels.

France said it was prepared to launch attacks within hours, and Britain also indicated it was prepared to act quickly. Initial strikes are likely to tar get air defense systems and runways; it was unclear whether plans were also in motion to strike at tank columns and other government ground forces headed east.

US officials said it would probably take several days for a full operation to be undertaken and that President Obama has not yet approved the use of the military. Obama has preferred to let other nations publicly lead the response to the Libyan crisis.

In a measured response to the vote that contrasted with threats earlier in the day by Khadafy to “show no mercy’’ to the rebels, Libya’s deputy foreign minister Khaled Kaim told reporters that Libya welcomed clauses in the resolution calling for protection of civilians.

But he cautioned the international community against arming the opposition, saying it would be tantamount to “inviting Libyans to kill each other.’’ The intention of the Libyan armed forces, he said, was “to protect civilians and guarantee food and medical supplies.’’

Adoption of the resolution was seen as the last major hurdle to implement plans drawn up by NATO in recent weeks that include unspecified US participation by five warships stationed off the Libyan coast or US aircraft. Several senior members of Congress demanded the administration consult with them before authorizing any US deployment, and Pentagon officials held a classified briefing on Capitol Hill late in the day.

“The United States stands with the Libyan people in their quest for their universal human rights,’’ Ambassador Susan Rice said in casting the US vote in favor of the resolution. Russia, China, Germany, Brazil, and India — all of whom expressed reservations about the move — abstained.

Earlier yesterday, Khadafy had warned the city that “we are coming tonight and there will be no mercy.’’ In an audio address delivered on state television, he promised to hunt down opposition “traitors . . . in the alleyways, house to house, room to room. . . . The whole world will watch Benghazi and see what will happen in it.’’

Libya’s defense ministry threatened swift retaliation against any outside attack. “Any foreign military act against Libya will expose all air and maritime traffic in the Mediterranean to danger, and civilian and military facilities will become targets,’’ the defense ministry said in a statement distributed by the state news agency.

The UN vote, weeks after Obama called on Khadafy to step down, came only after the Arab League agreed Saturday to support a no-fly zone over Libya. The resolution “requests’’ Arab League members to cooperate with other UN members in implementing its terms, and US officials said they expected several Arab governments would help fund the operation or even contribute military assets.

In addition to a specific “ban on all flights in the airspace of the Libyan Arab Jamahiriya’’ and use of “all necessary measures’’ to protect civilians, the resolution authorizes interdiction and inspection “on the high seas’’ of all vessels and aircraft bound to or from Libya provided there are “reasonable grounds to believe that the cargo contains items’’ prohibited under a previously adopted arms embargo and other sanctions.

It also calls on all UN members to stop the flow of “armed mercenary personnel’’ to Libya.

Libya’s renegade UN-based diplomat, Ibrahim Dabbashi, praised the council’s action and urged outside powers to move “immediately’’ to halt Khadafy’s military offensive. The vote, Dabbashi said, sent a clear message to the Libyan people that they “are not alone. We are glad that Benghazi will now be safe.’’

In a statement earlier yesterday, Secretary of State Hillary Rodham Clinton said that establishment of a no-fly zone would require “bombing targets like the Libyan defense systems.’’

US military officials said Libya has more than 30 surface-to-air missile installations, largely positioned along its Mediterranean coast, where most of the population resides. Its arsenal also includes an unknown number of long-range missiles that can reach up to 180 miles off the coast. Libya also operates more than 15 early-warning radar sites along the coast, a Defense Department spokesman said.

Before the United States shifted its stance, some senators, led by John F. Kerry, had suggested the administration was too cautious in its response.

“Time is running out for the Libyan people,’’ Kerry said at a Senate hearing early yesterday.

“The administration deserves credit for getting this resolution passed with such strong support,’’ they said in a joint statement.

“This was an important step on behalf of the people of Libya, but it will only be as effective as its implementation.’’