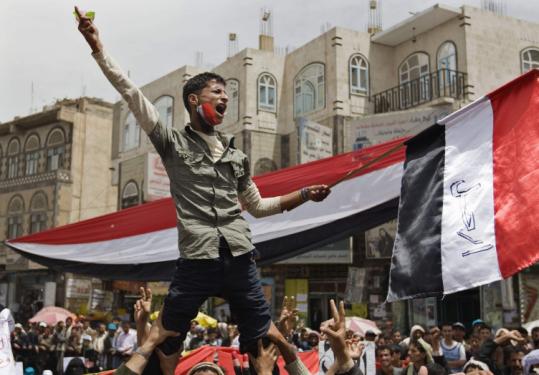 MANAMA, Bahrain — Bahrain arrested six opposition leaders yesterday, kept the main hospital surrounded by troops and tanks, and imposed a nighttime curfew on the center of its capital as it moved to the next stage of its crackdown on reform-seeking protesters, sending the political opposition into crisis.

A day after troops drove demonstrators from the main square and destroyed a month-old tent city there, popular unrest had been reduced to a few minor skirmishes in villages known as opposition strongholds. There was much defiant talk of keeping the struggle going, but also deep distress.

“We feel cornered and are trying to find our way out,’’ said Jalal Fairooz, a leader of the Wefaq opposition party in an interview at party headquarters. A group of Bahraini human rights groups appealed to the United Nations for help.

The two most important opposition leaders arrested were Hassan Mushaima, who had returned from exile in London last month and promised to lead a Shi’ite Islamist party, and Ebrahim Sharif, a Sunni and leader of a secular party seeking a liberal democracy. Four other leaders were also detained.

The government issued a statement saying those arrested had “called for the downfall of the regime and had intelligence contacts with foreign countries.’’ It said that during the recent unrest, those detained had “incited for the killing of citizens and the destruction of public and private property.’’

King Hamad bin Isa Al Khalifa, who invited Saudi troops in to help and declared three months of martial law, made a surprise visit to the financial district of downtown Manama, the capital, to praise troops and press to restore a sense of normality. The stock market reopened but the vast majority of stores were shuttered, rubble still littered the streets and traffic was light. Most people stayed home.

The Obama administration continued to express distress at the Bahraini crackdown, but the widespread feeling here was that Washington’s objections were too soft.

“The American language should have been much tougher,’’ said Yousif Almuhafda, a spokesman for the Bahrain Center for Human Rights, said.

Bahrain is a key US ally. The Navy’s Fifth Fleet is based here and the Khalifa royal family has warm relations with Washington.

Violent day in YemenSANA, Yemen — Security forces and government loyalists struck protest camps across the nation, hurling rocks, beating protesters with sticks, and firing rubber and live bullets, hoping to break the will of thousands who have camped in squares for a month and demanded their longtime authoritarian leader leave power.

The violence underscored the chipping-at-the-edges tactic of President Ali Abdullah Saleh, who has ruled Yemen for over 30 years. He does not appear to have the will — or perhaps the capabilities — to disperse the demonstrators conclusively. In the past few weeks, he has unleashed fiery assaults on protesters in different cities using a mix of security forces and paid thugs, apparently hoping to wear them out.

It is just one of the problems this extremely poor, tribal country faces. Even before protests began in mid-February, Yemen’s government was struggling to confront one of the world’s most active Al Qaeda branches, a secessionist rebellion in the south, and a Shi’ite uprising in the north. Saleh is a key ally in the US campaign against the Al Qaeda terror network.

Al Qaeda militants ambushed police yesterday as they ate lunch at a checkpoint. In a gunfight, three militants and three police were killed, said a security official in the province of Marib.

Monitors ousted in KenyaNAIROBI, Kenya — Djibouti’s government has kicked out an American election monitoring group less than a month before the nation’s presidential election, a vote opposition politicians are boycotting because they say the president is repressing dissent.

Djibouti is a tiny East African nation that hosts the only US military base in Africa. Situated on the Gulf of Aden between Somalia, Ethiopia, Eritrea, and Yemen, the city-state is a major shipping hub in a volatile region.

The country is nominally democratic, but events leading up to the April 8 presidential election appear to show a hard-line approach by President Ismail Omar Guelleh at a time when democracy movements are upending administrations.