Had been given job by Mubarak 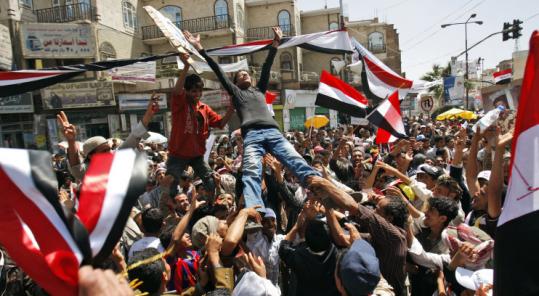 Mubarak stepped down Feb. 11 and the military took control of the country, but Shafiq remained in office at the head of a caretaker government.

A brief statement posted on the military’s official website said it had chosen former transport minister Essam Sharaf as the new prime minister and asked him to form a new caretaker Cabinet to run the government throughout a transition back to civilian rule.

Sharaf served in the Cabinet for 18 months between 2004 and the end of 2005. An engineer by profession, he has visited the anti-Mubarak protesters in Cairo’s central Tahrir Square, the uprising’s epicenter, something that endears him to the youth groups behind the opposition movement.

Mohamed ElBaradei, a leading pro-democracy activist and Noble Peace Prize laureate, welcomed Shafiq’s departure and thanked the military for “listening to the people.’’

Tunisia Tunisia’s interim president, Fouad Mebazaa, has called for the election of a council that he said would write a new constitution for the North African country.

Mebazaa, in a televised speech, said the election for the National Council will take place July 24.

The current constitution, he said, is distorted and doesn’t serve the country, where a popular revolt forced President Zine El Abidine Ben Ali from power on Jan. 14.

Protesters have kept up pressure since the fall of Ben Ali, demanding a timetable for constitutional changes and elections, and a government free of former regime members. (Bloomberg News)

Yemen A coalition of Yemeni opposition groups has proposed a plan to end the country’s political crisis that would involve embattled President Ali Abdullah Saleh stepping down by the end of the year, a spokesman for the group said yesterday.

Bahrain The Shi’ite opposition groups in Bahrain seeking to loosen the Sunni monarchy’s grip on power said yesterday that they are ready to negotiate with the gulf nation’s rulers about political change after weeks of protests.

The two-week standoff, in which seven protesters were killed, has rattled one of the wealthiest corners of the Middle East, where it was long assumed that oil riches would stave off the kind of unrest that has roiled Tunisia, Egypt, Yemen, and Libya.

Bahrain’s sectarian division, however, left it vulnerable. The kingdom has a Shi’ite majority that has been ruled for 200 years by a Sunni dynasty that it accuses of discriminatory policies and political persecution.

Senior opposition leader Abdul Jalil Khalil said the monarchy’s opponents will accept the crown prince’s invitation for dialogue. He said no date had been set for the beginning of the talks. (AP)

China Apparently unnerved by an anonymous Internet campaign urging Chinese citizens to emulate the protests that have rocked the Middle East, Chinese authorities this week have begun a forceful and carefully focused clampdown on activities by foreigners that the government deems threatening to political stability.

Public security officials have summoned dozens of foreign journalists in Beijing and Shanghai to be dressed down on videotape, warning them that they had broken reporting regulations by visiting locations that had been selected as protest sites in Internet postings. (New York Times)