President says US, Israel are at root of nation’s turmoil 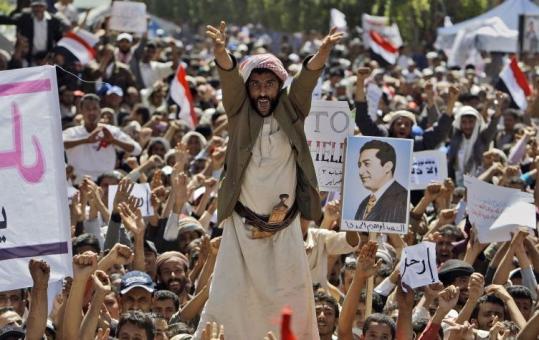 SANA, Yemen — Yemen’s president, Ali Abdullah Saleh, maintained a tenuous hold on power yesterday, blaming the United States and Israel for protests across the Arab world, while a prominent radical cleric joined the growing crowds demanding his ouster and called for an Islamic state.

US officials expressed concern about the statement of the cleric, Abdul Majid al-Zindani, a onetime mentor of Osama bin Laden, which introduced a new Islamist element to the turmoil in a country where Al Qaeda is viewed as a grave threat. The protests that toppled leaders in Tunisia and Egypt and that now threaten rulers in Libya, Bahrain, and Oman have been largely secular in nature.

Zindani spoke on an open-air stage before several thousand antigovernment protesters, guarded by 10 men carrying AK-47s and shielded from the scorching sun by two umbrellas wielded by aides.

“An Islamic state is coming,’’ he said, drawing cries of “God is great’’ from some in the crowd.

He said Saleh “came to power by force and stayed in power by force, and the only way to get rid of him is through the force of the people.’’

It was not clear how much support Zindani had among the protest movement.

As the opposition held what it called “a day of rage,’’ the progovernment camp mustered one of its biggest crowds in weeks of turmoil. Demonstrators replaced their opponents’ slogan — “the people want the regime to fall’’ — with the words “the people want Ali Abdullah Saleh.’’

Obama administration officials increasingly fear the power vacuum that they believe would follow if Saleh, whose son, nephews, and close allies in the Sanhan tribe control the military and intelligence agencies, departed. Zindani has long supported Saleh, and his defection, which followed that of tribal leaders and a refusal Monday by opposition parties to join a unity government, was a sign of how quickly the president’s patronage system is dissolving, a senior administration official said.

Saleh, for his part, sought to distance himself from Washington with comments all the more startling given the United States’ political support and military aid to his government.

“From Tunis to the sultanate of Oman,’’ Saleh said, the wave of protest is “managed by Tel Aviv and under the supervision of Washington.’’

US officials dismissed the accusation. Privately, administration officials said they believed that Saleh was posturing to hang onto his job.

Oman
Troops were deployed north of the capital, Muscat, and near the border with the United Arab Emirates, following three days of antigovernment protests, a government official said.

Oman, ruled by a powerful family dynasty, is the latest Arab nation to be swept up in a wave of regional unrest.

The center of protests in Oman has been the port town of Sohar, about 120 miles northwest of Muscat, where demonstrators demanding higher salaries and jobs have clashed with security forces.

Thousands participated in a progovernment rally yesterday afternoon. They rallied in central Muscat in front of the capital’s biggest mosque, chanting slogans in support of Oman’s long-serving ruler.

Iran
Police used tear gas and batons yesterday to disperse resurgent antigovernment protesters demanding the release of opposition leaders in the biggest clashes in Iran’s capital since demonstrators stormed back to the streets two weeks ago, witnesses and opposition websites said.

The recent return of skirmishes in the heart of Tehran — absent for more than a year after relentless crackdowns — borrows some raw inspiration from uprisings in the neighboring Arab world. But it also reflects a possible miscalculation by authorities who sought to silence opposition leaders but instead gave their supporters a new rallying point.

Reports by family members and opposition websites claim the two most prominent antigovernment figures, Mir Hossein Mousavi and Mahdi Karroubi, have been moved from house arrest to full-time detention along with their wives. Iranian authorities deny the reports, but the two opposition leaders have not been seen in public or posted statements on their websites in more than a week.

Tunisia
A Tunisian Islamist party banned for more than 20 years was legalized yesterday, while the country’s most prominent opposition figure quit the unity government amid renewed uncertainty about where Tunisia is headed.

The Ennahdha party — branded an Islamic terrorist group by Tunisia’s deposed leader but considered moderate by scholars — has rebounded onto the political scene since a popular uprising forced out autocratic President Zine El Abidine Ben Ali in January.

The party’s activism has fed jitters that extremism may be on the rise in Tunisia, long a Westward-looking nation where women enjoy widespread freedoms, Muslim headscarves are banned in public buildings, and abortions, a deep taboo in most Muslim societies, are legal.

Tunisia’s caretaker government is trying to restore stability after weeks of deadly clashes between police and protesters that led to Ben Ali’s ouster — and sparked revolts across the Arab world.

Tunisia also is struggling with an exodus of refugees fleeing violence and chaos in neighboring Libya. Aid workers at the Libya-Tunisian border, where authorities say up to 75,000 people have fled Libya in just the past nine days, warned that the situation is reaching a crisis.