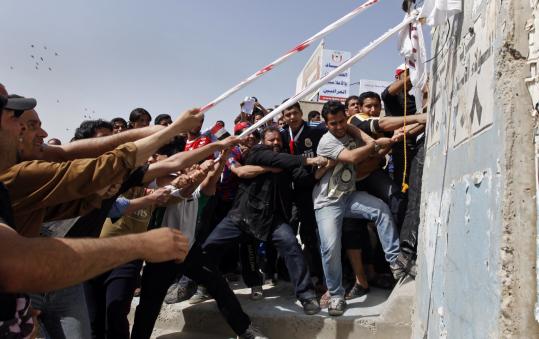 Protesters pulled concrete blast walls leading to the heavily guarded Green Zone during a protest in Baghdad yesterday. Unlike protesters in other Arab countries, the Iraqis were not calling for a new government, but for reforms from Iraq’s elected leaders. (Hadi Mizban/Associated Press)
By Brian MacQuarrie Globe Staff / February 26, 2011

BAGHDAD — Tens of thousands of Iraqis took to the streets yesterday in nationwide protests that left at least 19 dead and dozens wounded, but the US military consciously and conspicuously remained on the sideline.

This encounter, American officials said, posed a key test for Iraqi troops and riot police following the transfer of lead security responsibilities from the US military to the Iraqi government on Sept. 1.

Two protesters were shot dead by Iraqi security forces in the northern city of Mosul, and one was killed in Ramadi. A crowd of more than 1,000 demonstrators in Baghdad, some tossing bricks and rocks, clashed with troops and riot police on a key bridge leading to government offices in the protected international Green Zone.

But according to US Embassy officials, the Iraqi Army and police appear to have passed this test following years of high-priority training by US military advisers to help them function as a standalone, sovereign force.

“What we have seen . . . is that Iraq’s security forces generally have not used force against peaceful protesters,’’ Aaron Snipe, deputy spokesman for the US Embassy, said last evening. “There have been reports of violence in separate incidents. But Iraqi security forces appear to have followed Prime Minister Maliki’s directive by ensuring that citizens who choose to protest peacefully would be allowed to do so.’’

That assessment was echoed in Baghdad by an eyewitness to clashes on the Tigris River bridge leading to the Green Zone. A woman, who asked that her name not be used, said the army appeared to restrain its response as the swelling crowd, which she estimated at 5,000 people, began tearing down concrete barriers on the bridge and pelting about 1,500 soldiers and riot police with rocks and bricks.

“The army was good in that they kept their soldiers under control,’’ the woman said. “The riot police, though, were heavy-handed.’’

The police, brandishing shields and armed with clubs, waded into the crowd and injured many protesters, she said. “They were chasing people down.’’

Although the Iraqi demonstrations had been modeled after the protests spreading against autocratic regimes in the Arab world, their goal appeared to be different. Instead of seeking to topple a long-ensconced dictator, the Iraqis clamored for the new elected government to work to eliminate corruption, improve basic services, and create more jobs.

The woman said she had expected larger protests, but that appeals for calm from Prime Minister Nouri al-Maliki and Shi’ite religious leader Moqtada al-Sadr appeared to have limited crowd sizes. Access to the demonstration site was curtailed by a city ban on vehicle traffic.

During the day, US forces stayed close to their bases. A US civilian who is helping train Iraqi security forces said a lockdown had been ordered at American facilities.

For a US military that toppled Saddam Hussein with devastating force and then waged a protracted fight against a stubborn insurgency, yesterday’s role of uninvolved observer represented another signpost on the road to the Dec. 31 deadline of total troop withdrawal. Roughly 50,000 US troops remain in Iraq, about a third of the number there at the height of US involvement.

Now, the American military’s primary mission is to advise, train, and assist the 600,000-member Iraqi Army and police force. However, US troops retain the right to defend themselves and are available if the Iraqi government requests their help.

“Iraq is a sovereign nation, and responding to civil unrest is an issue for the government of Iraq,’’ said Major General Jeffrey Buchanan, spokesman for US forces here.

Iraqi security forces, Buchanan said, use an adapted US curriculum to train for responding to civil unrest “while still preserving the people’s right to peaceful demonstrations.’’

“Freedom of expression is an important part of any democracy,’’ he added. “We see that as a fundamental human right.’’

Colonel Doug Harding, who works in the US transition effort as director of the Commander’s Initiative Group, said yesterday’s response of Iraqi security to an Iraqi protest shows that the complex US withdrawal is well underway.

“We wouldn’t be out there. It’s not the way we’re operating now,’’ Harding said of the dwindling US military presence.