In Egypt, women voice hope for boost in status 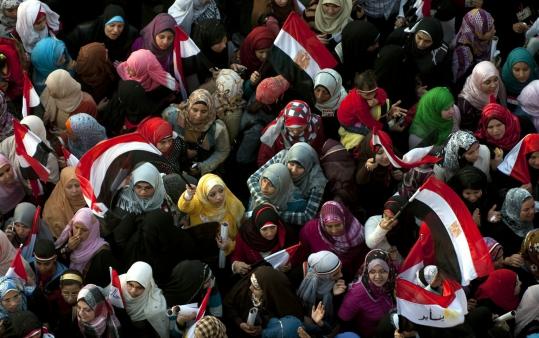 CAIRO — Women think as differently as they dress here, but they have emerged from the barricades agreeing on one thing: This is their moment in history, and they cannot afford to lose it.

During 18 days of demonstrating for freedom and democracy, Egyptian men and women walked into Tahrir Square separate and unequal, divided by gender as they passed through checkpoints. Men were scrutinized by men, and women were searched by other women. There were several lines of men for every one for the fewer numbers of women.

But beyond the checkpoints, distinctions vanished and they stood side by side, defying the police, challenging the government, one and the same before the thugs throwing rocks and Molotov cocktails. Women died next to men and did not falter, steadfast for freedom and democracy.

Now, as they leave the square behind them, they want to use the strength they revealed to address longstanding inequities, to make sure women have the equality in day-to-day life that they earned in Tahrir Square.

“It was amazing to see men and women together when we took to the streets,’’ said Marwa Faroak, a political activist. “A lot of people were saying Tahrir Square was the future of Egypt, men and women equal, fighting for freedom. And now we have to translate this into action and change.’’

Soha Abdelaty, deputy director of the Egyptian Initiative for Personal Rights, said Egyptians are building a new country, and women must be at the forefront so they can be effective advocates for their interests. She is optimistic but not yet ready to predict that women will indeed achieve more rights.

Women are better off in Egypt than some parts of the Arab world. There are no religious police enforcing dress codes as in Iran, or prohibitions against driving as in Saudi Arabia.

But Egyptian women are greatly underrepresented in public life and inferior to men before the law. They hold Cabinet posts but no judgeships. They are members of Parliament but have few seats. They occupy many professions but not all.

Divorces are difficult to obtain and favor men, as do property rights. Women are encouraged to marry and have children early. The legal age of marriage was only recently raised from 16 to 18.

And, every day as they walk down the street, they are reminded of their low status. Egyptian women are sexually harassed to an astonishing degree; no law forbids behavior such as groping and ogling. In a 2008 survey, the Egyptian Center for Women’s Rights in Cairo found that 83 percent of Egyptian women and 98 percent of foreign women had been harassed at some point.

Though the American television reporter Lara Logan was beaten and sexually assaulted as pro-Mubarak forces whipped up anti-American and antijournalist frenzy in Tahrir Square, that attack was the brutal exception during the protests. Egyptian women who were in the square said they were treated with a tolerance they hardly expected. Woman after woman marveled at that.

“One of the things that gave me an incredible sense of wonder was how safe I felt,’’ Faroak said. “I spent the night there, with all kinds of different people, and Tahrir Square became safer than anywhere else for a woman to be.’’

Faroak, a lawyer, said she feels more confident now as she goes to work and that an air of tolerance has persisted and must be maintained lest it dissipate along with the euphoria of victory.

“We were equal partners in this revolution,’’ she said, “and we are respected as such. Now we have to use the moment effectively, to make sure women participate in daily political life, to make sure they are involved in the development of political parties and labor movements.’’

Abdel Ibrahim Hassan, who came to Tahrir Square on Friday to celebrate the revolution with untold thousands of his fellow citizens, argued that women have an enviable standing already and that Western prejudices should not assume they need change.

“Islam respected the role of women before any other culture,’’ said Hassan, a math teacher. “Before Islam, women were bought and sold. But men and women are not equal; a woman is a weak creature. She cannot bear arms.’’

His wife, Samah, bearing an Egyptian flag and wearing a black niqab covering her face with only small slits for her eyes, spoke up — strongly.

“I’m hoping our young people will be able to develop a democracy,’’ she said. “Men and women will play an important part in the elections.’’

Their 15-year-old daughter, Sarah, her face and hands the only parts of her body visible from her enveloping black garments, interrupted.

“We demand seats in Parliament for young people — men and women,’’ she said. “Women will play an important role in society after participating in the revolution of January 25th.’’

Hassan, who had brought his family from their home 50 miles away in the Sixth of October District, did not contradict her.

“A woman is not as physically strong as a man,’’ Sarah said. “But she has emotional virtues that he does not. A man can carry a wounded person to the hospital, but the woman will nurse him back to health.’’