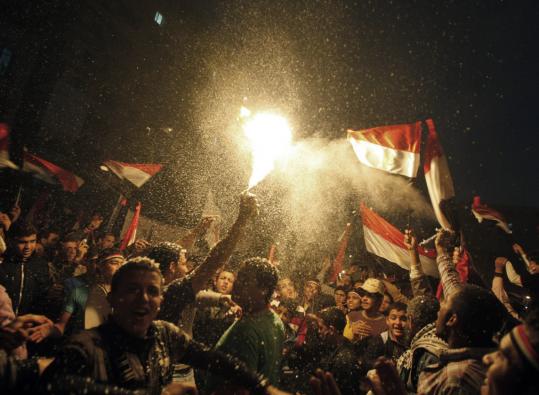 Tens of thousands of flag-waving Egyptians packed into Tahrir Square in Cairo for a day of prayer and celebration yesterday to mark the fall of Hosni Mubarak a week ago. (Khalil Hamra/Associated Press)
By Ben Hubbard Associated Press / February 19, 2011

CAIRO — Egyptians thronged again to Tahrir Square yesterday, one week after the downfall of Hosni Mubarak, in a sun-splashed victory celebration of dancing, singing, and flag-waving — but also serious resolve to pressure the country’s military rulers to implement changes.

The military allowed — even encouraged — the celebrations. But it gave its strongest warning yet against a wave of labor strikes that erupted in parallel with the massive antigovernment protests and have hit Egypt’s economy hard over the past week. In a statement, the military said it would no longer allow “illegal’’ demonstrations that stop production.

The crowd in downtown Cairo’s Tahrir Square appeared to spiral well beyond the quarter-million that massed for the biggest of the anti-Mubarak protests. The rally was called to press demands on the military to take greater action to remove regime figures who still hold considerable power.

But for many, it was as much a nationalist festival of what has been accomplished as a rally to demand more.

Under brilliant sunshine, giant Egyptian flags were unfurled, and people sought the shade beneath the black, white, and red fabric. Parents painted their children’s faces with the national colors. Vendors hawked T-shirts praising the “Jan. 25 revolution,’’ a reference to the date protests began in the square.

Protest leaders told the gathering that rallies must go on until the military rulers meet their demands.

Demonstrators want the army to dissolve the caretaker government headed by Prime Minister Ahmed Shafiq, which was appointed by Mubarak in his final weeks and contains many of his stalwarts. They also want the lifting of emergency laws that give police near unlimited powers of arrest. So far, the military has not moved on either issue, or on another demand for the release of thousands of political prisoners.

“We’ll stay in the square until there is a new government, because there is no way we will see change under a government by the National Democratic Party,’’ proclaimed prominent TV journalist Wael el-Ibrashi, one of the speakers on a stage before the crowd, referring to Mubarak’s former ruling party.

The government last week said only that it froze “any possible assets’’ in the country belonging to Mubarak, his wife, their two sons, and their wives, Mubarak’s brother-in-law, and five senior politicians belonging to the ousted leader’s NDP party.

At the time the government insisted there was no confirmation such assets actually existed, even though they have been widely reported.

Late yesterday, the Foreign Ministry specified that “several dozens of millions of francs belonging to persons mentioned in last Friday’s government order have been blocked.’’ It had no further comment.

In Egypt, protest organizers have called for weekly protests every Friday, and their ability to keep them going will be a major test of how much they can influence the army.

Prominent cleric Sheik Youssef el-Qaradawi, who is linked to the Muslim Brotherhood, led the crowd in prayers, proclaiming, “The revolution is not over, until we have a new Egypt.’’

Qaradawi’s appearance in Cairo’s main square marked a dramatic return for the influential cleric, who has mostly lived abroad for decades after being jailed for his antigovernment stances. During the protests, he used his weekly television show on Al Jazeera to urge Egyptians to join. In the square yesterday, he hailed the young protest activists — from a range of ideologies — saying, “They knew that the revolution would win in the end.’’