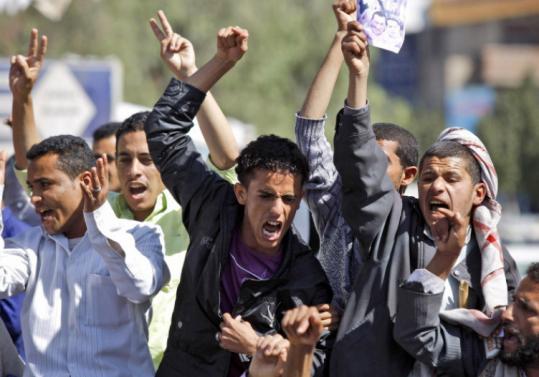 SANA, Yemen — Yemeni police armed with sticks and daggers beat back thousands of protesters marching yesterday through the capital in a third straight day of demonstrations calling for political reforms and the resignation of the country’s US-allied president.

The protests have mushroomed since crowds gathered Friday to celebrate the ouster of Egypt’s president, Hosni Mubarak, after an 18-day revolt fueled by similar grievances.

Yemen is one of several countries in the Middle East feeling the aftershocks of proreform uprisings in Egypt and Tunisia. A similar demonstration was held over the weekend in Algiers, and opposition groups are also pushing for change in Bahrain and Jordan.

Police used truncheons to stop the Yemeni protesters, many of them university students, from reaching the central Hada Square in Sana, the capital. Witnesses said plainclothes police officers wielding daggers and sticks also joined security forces in driving the protesters back.

The Ministry of Interior called on people not to heed “suspicious calls for chaos’’ and to avoid rallies that obstruct daily life.

Yemen’s president, Ali Abdullah Saleh, postponed a trip to Washington scheduled for next month because of the events, the state news agency reported.

Much is at stake in Yemen — a deeply troubled nation strategically located at the mouth of the Red Sea and next door to the world’s largest oil reserves. Saleh’s weak government is already under pressure from a southern separatist movement and disaffected tribesmen around the country.

The United States, however, is most worried about an Al Qaeda offshoot that has taken root in Yemen’s mountains in the past few years. The group has used Yemen as a haven to plot attacks beyond the country’s borders, including the failed attempt to blow up a US-bound airliner in December 2009 by an attacker with a bomb sewn into his underwear.

Saleh — in power for three decades — is quietly cooperating with the United States in efforts to battle the Al Qaeda franchise, but his government exercises limited control in the tribal areas beyond the capital. The United States is sending him military aid and training.

The country’s security forces, however, are already stretched thin on two other fronts: Since 2004, they have struggled to contain a serious rebellion in the north by members of the Zaidi sect of Shia Islam who complain of neglect and discrimination. At the same time, police and army forces are clashing with a secessionist movement in southern Yemen, which was a separate country until 1990.

Now, the protests calling for the president’s ouster over corruption allegations and other complaints are adding another serious challenge to the list.

Opposition parties set several conditions for joining talks with the government, including a definitive timetable for “constitutional, legal, and economic reforms.’’ The parties also demanded that Saleh remove his sons and other relatives from army, security, and government posts.

Saleh has tried to defuse the unrest by promising not to run again when his term ends in 2013 and guaranteeing that he will not seek to pass power on to his son.

In Bahrain yesterday, security forces set up checkpoints and clashed with marchers in at least one village as opposition groups blanketed social media sites with calls to stage the first major antigovernment protests in the Persian Gulf since the uprising in Egypt.

The wide-ranging clampdown appeared directed toward Bahrain’s Shi’ite majority — which led a drive for rallies today — and reflected the increasing worries of the Sunni rulers who have already doled out cash and promised greater media reforms in an effort to quell the protest fervor.

A prominent human rights activist predicted “chaos and bloodshed’’ in Bahrain if attempts are made to crush the planned demonstrations.

The tiny kingdom is among the most politically volatile in the Persian Gulf and holds important strategic value for the West as the home to the US Navy’s Fifth Fleet. Bahrain’s Shi’ites — accounting for nearly 70 percent of the population — have long complained of systematic discrimination by the ruling Sunni dynasty, whose crackdown on dissent last year touched off riots and clashes.

In Algiers, the organizers of a proreform protest that brought thousands of Algerians onto the streets of the capital over the weekend called yesterday for more rallies next Saturday. The Coordination for Democratic Change in Algeria — an umbrella group for human rights activists, unionists, lawyers, and others — has called for demonstrations throughout the country.

Organizers said about 10,000 took part in the Algiers rally Saturday, though officials put turnout at 1,500. Many protesters held signs reading “Bouteflika out,’’ in reference to President Abdelaziz Bouteflika, who has run the impoverished but gas-rich North African nation since 1999.

Under the country’s long-standing state of emergency, public protests are banned in Algiers, and an estimated 26,000 riot police set up barriers throughout the city in a failed bid to quash Saturday’s gathering.