THIS STORY HAS BEEN FORMATTED FOR EASY PRINTING
TURMOIL IN EGYPT 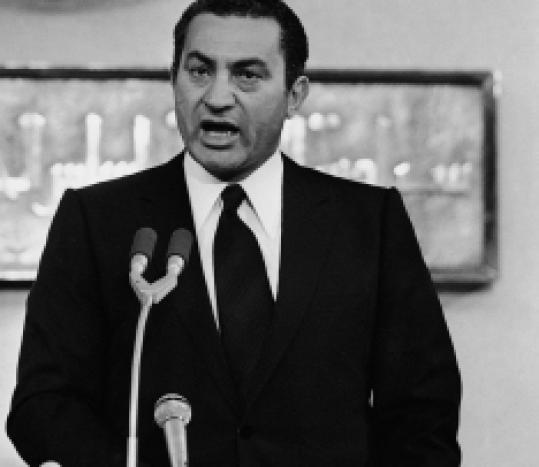 Oct. 6, 1981: Egyptian President Anwar Sadat is assassinated by Islamist gunmen opposed to peace with Israel while Sadat and his vice president, Hosni Mubarak, review a military parade in Cairo. Mubarak is made the interim leader until elections later that month, which he wins. He is sworn in as Egypt’s fourth president.

April 25, 1982: The Sinai Peninsula is returned to Egypt from Israel, a major provision of the historic Egyptian-Israeli peace treaty of 1979.

Feb. 25, 1986: Thousands of security police conscripts mutiny, unleashing a three-day rampage that destroys hotels near the pyramids. Unrest spreads to Cairo and other cities. It is the worst unrest Mubarak would face until this year.

Sept. 11, 1986: Mubarak holds a summit with Israeli Prime Minister Shimon Peres, the first summit between leaders of the two nations since 1981.

Oct. 5, 1987: Mubarak is elected to second six-year term as president with no opposition.

Sept. 28, 1995: Mubarak plays a supporting role in the Israeli-Palestinian agreement to expand self-rule of the Palestinians in the occupied territories.

Sept. 5, 1999: Palestinian leader Yasser Arafat and Israeli Prime Minister Ehud Barak sign a peace accord that sets a time frame for talks on a permanent agreement and provides for Israeli withdrawal from the West Bank. The pact was signed in the Egyptian resort city of Sharm el Sheikh; the next day, a man trying to assassinate Mubarak is killed.

Sept. 27, 2005: Mubarak is reelected to fifth term in the country’s first contested elections.

Dec. 8, 2005: The Muslim Brotherhood increases its seats in Parliament after an election marred by violence.

June 4, 2009: President Obama speaks in Cairo, calls for a “new beginning’’ in ties between the United States and the Islamic world.

Dec. 2, 2010: The ruling National Democratic Party consolidates its hold on Parliament, winning more than 90 percent of the seats in an election rife with fraud and vote-rigging, outside analysts contend.

Jan. 1: A bomber strikes a Coptic Christian church in Alexandria, killing 21 people. It is the worst attack against the Christian minority in recent memory and sparks days of protests.

Jan. 14: A sudden and explosive wave of street protests in Tunisia ousts its authoritarian president, Zine el Abidine Ben Ali, who had ruled for 23 years.

Jan. 25: Inspired by the fall of Ben Ali, thousands fill streets and squares of Cairo, Alexandria, and other Egyptian cities to denounce Mubarak’s rule. The demonstrations become centered on Tahrir Square in Cairo.

Feb. 1: More than a quarter million people pack Cairo for renewed, but peaceful, demonstration. In an address on state television, Mubarak announces he will not run for a new term in September elections.

Yesterday: Mubarak declares his intention to remain in office despite declining support and growing calls for his ouster.