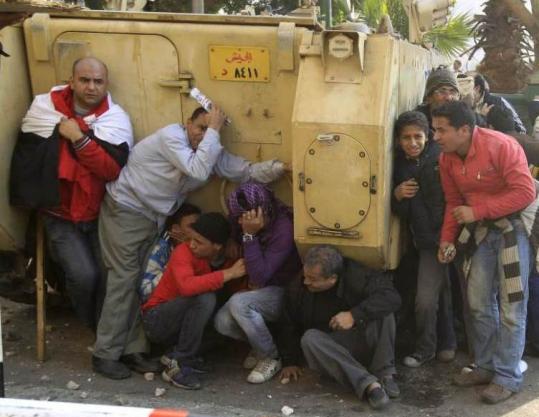 As chaos gripped central Tahrir Square in Cairo yesterday, journalists covering the scene on the ground found themselves the targets of violence and intimidation by demonstrators chanting slogans in favor of President Hosni Mubarak. One prominent US television correspondent, Anderson Cooper of CNN, was struck in the head repeatedly.

Reporters Without Borders said it had received dozens of confirmed reports of violence against local and international journalists in Egypt. Tala Dowlatshahi, a spokeswoman for the group, said “to expect more foreign journalists to be targeted.’’

The attacks were reported by Al Jazeera, CNN, and Twitter users almost as soon as violent clashes began in the square, eliciting a condemnation from the White House and the State Department.

“The United States denounces these attacks and calls on all engaged in demonstrations currently taking place in Egypt to do so peacefully,’’ said Philip J. Crowley, assistant secretary of state for public affairs. “The use of violence to intimidate the Egyptian people must stop.’’

The attacks on reporters came as Internet access was restored in Egypt for the first time since last week. Many Egyptian bloggers began posting in earnest.

Egyptian state television also began showing images from Tahrir Square for the first time, focusing on supporters of Mubarak and scenes of pitched street battles. It appeared likely that both moves by the government were directed at painting a violent image of the antigovernment protesters.

“It’s clearly a media strategy that’s being implemented,’’ Dowlatshahi said. “State-controlled television has been broadcasting soap operas and cooking shows for the past few days until today.’’

The government has sought to control information since large-scale protests against Mubarak and his subordinates began last month, but overt harassment has been scattered and attempts to control the gripping images and narratives from Cairo have mostly failed. Yesterday’s attacks appeared to represent the most coordinated and widespread effort to stop foreign reporters from doing their jobs.

“The Egyptian government is employing a strategy of eliminating witnesses to their actions’’ in a “series of deliberate attacks on journalists,’’ said Mohamed Abdel Dayem of the Committee to Protect Journalists.

A senior editor at CNN said Cooper and his crew had been attacked while in the square. Cooper, the network’s marquee anchor, “was punched 10 times in the head as pro-Mubarak mob surrounded him and his crew trying to cover demonstration,’’ Steve Brusk wrote on Twitter.

Cooper later recounted the episode in a live report and did not appear hurt.

Another CNN correspondent, Hala Gorani, told television viewers of being threatened by apparent supporters of the president.

At least one reporter was arrested, according to Reporters Without Borders. The journalist, a Belgian named Serge Dumont, said he had been hit in the face by men in plainclothes, accused of spying, and taken to a military post.

“Protesters are hunting down Al Jazeera journos,’’ wrote Abbas Al Lawati of Gulf News in Dubai. “I keep having to clarify that I’m not one of them.’’

An Australian television reporter, Hamish Macdonald, wrote that a colleague had seen one reporter badly beaten, and that their crew was unable to leave their hotel.

Christiane Amanpour of ABC News wrote in a dispatch from Cairo that she and her crew had been surrounded by an angry mob as they tried to film.

“They kicked in the car doors and broke our windshield as we drove away,’’ she said.

The crew members were forced to return to their hotel for safety.