THIS STORY HAS BEEN FORMATTED FOR EASY PRINTING
TURMOIL IN EGYPT

At least 3 die, 600 are injured in fierce clashes with protesters 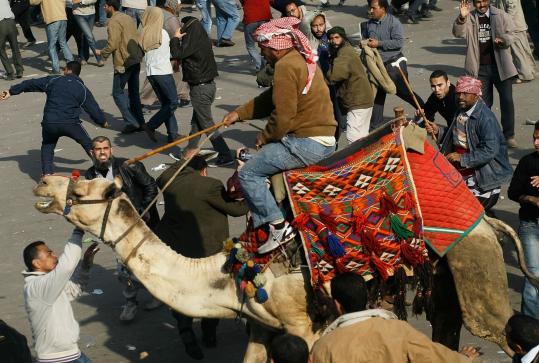 A supporter of Egyptian President Hosni Mubarak rode a camel through the crowd during a clash between Mubarak backers and protesters yesterday in Cairo. (Chris Hondros/Getty Images)
By David D. Kirkpatrick and Kareem Fahim New York Times / February 3, 2011

CAIRO — Egyptian President Hosni Mubarak struck back at his opponents yesterday, unleashing waves of his supporters armed with clubs, rocks, knives, and firebombs in a concerted assault on thousands of antigovernment protesters in Tahrir Square calling for an end to his authoritarian rule.

After first trying to respond peacefully, the protesters fought back with rocks and firebombs of their own. Scores of the wounded were carried back on cardboard stretchers to a makeshift clinic set up in a nearby mosque, where they were treated by dozens of doctors.

By 9 p.m., government officials said, about 600 people had been injured and three killed in the day’s battles; more than 150 people have died in the week of violence, human rights groups say. The crackdown came in defiance of calls by the United States and Europe to avoid violence, and it provoked swift condemnation and a rift with the Egyptian government, a longstanding ally.

In another sign of the shifting landscape in the Middle East, another authoritarian government made a concession to protesters as the president of Yemen, Ali Abdullah Saleh, said neither he nor his son would run for office in the next election.

The Egyptian military, with tanks and soldiers stationed around the square, neither stopped the violence nor attacked the protesters. Soldiers watched from behind the iron fence of the Egyptian Museum, occasionally shooting their water cannons, but only to extinguish flames ignited by the firebombs.

Only two days after the military pledged not to fire on protesters, it was unclear where the army stood. Many protesters argued that Mubarak was provoking a confrontation in order to prompt a military crackdown.

It is also possible the military was satisfied with his decision to step down, perhaps fearful of the more radical shift to democratic elections that protesters are demanding. Mohamed ElBaradei, who was designated to negotiate with the government on behalf of the opposition, asked that the army protect the protesters.

“The army has to take a stand,’’ he said in a television interview. “I expect the Egyptian army to interfere today.’’

The deployment of plainclothes forces paid by Mubarak’s ruling party — men known here as baltageya — has been a hallmark of the Mubarak government, and there were many signs that the violence was carefully choreographed.

The Mubarak supporters emerged from buses. They carried the same flags and the same printed signs, and they all escalated their actions, from shouting to violence, at exactly the same moment: 2:15 p.m. The protesters showed journalists police and ruling party identification cards that they said had been taken from several Mubarak supporters who had been caught infiltrating Tahrir Square and detained in a temporary holding pen.

Several people interviewed independently said that ruling party operatives had offered them 50 Egyptian pounds, less than $10, if they agreed to demonstrate in the square on Mubarak’s behalf.

Then, suddenly, at exactly 2:15 p.m. arguments between pro- and anti-Mubarak demonstrators around the square turned into shoving matches.

“We don’t know who is with us and who is against us now — we are lost,’’ said Abdel Raouf Mohamed, 37, before he was interrupted by a burly young man who shouted: “I love Mubarak! I need Mubarak!’’

Seven minutes later, Reda Sadak, 45, said: “In 10 minutes, there will be a big fight here. It is an old game, the oldest game in the regime.’’

In fact, before he finished speaking, rocks and sticks began to fly from the pro-Mubarak forces into the crowd of anti-Mubarak demonstrators.

Even then, many tried to avoid retaliation. A line of a half dozen unarmed men stood quietly, waving their hands in the air while the pro-Mubarak forces rained rocks down on them.

Sameh Saber, another anti-government protester, started running toward the battle line with a tree branch.

“Put it down,’’ an older man implored.

“Three of my friends are bleeding inside,’’ Saber yelled back, “and my friend lost an eye!’’

But he put down the branch.

At 2:50 p.m., as hundreds of rocks flew past the Egyptian Museum, two tanks started up. Anti-Mubarak protesters who had been standing on them jumped off and the crowd cheered with delight.

“The people and the army are one hand!’’ they chanted.

The tanks rolled to create a barricade between the opposing groups of demonstrators, and for a while the soldiers encouraged both sides to calm down. But then the soldiers seemed to retreat, and soon the anti-Mubarak forces began hauling scraps of metal to build a barricade around the tank.

A soldier on top of another tank fired live ammunition into the air to push back a surging group of pro-Mubarak protesters. A couple of men jumped up on the tank and started to kiss his feet, and for a moment the soldier, weapon in hand, began to cry.

At about 3:15 p.m., the battle was joined. Abandoning any attempt to avoid violence, thousands of anti-Mubarak protesters used scraps of steel to rip the pavement into pieces, carrying them in milk crates and scarves to hurl back at their attackers.

“They want to take the revolution from us,’’ said Mohamed Gamil, a 30-year-old dentist in the crowd of antigovernment protesters. “We are ready to die for the revolution.’’

Progovernment demonstrators chanted, “With our blood, with our souls, we sacrifice for you, oh, Mubarak.’’

Eighteen charged their foes on horseback and two on camels.

Soon the air was full of the sound of anti-Mubarak protesters banging rocks and steel to rally one another, and the smell of gas from burning firebombs.

“Mubarak kills his people!’’ said Islam Hessomen, 25, a protester. “He is letting the people kill each other!’’

As the carnage continued, many turned on the watching military behind the museum’s fence.

“Are you happy now?’’ the anti-Mubarak protesters jeered.

“They just sit there like chairs, waiting for orders, and when they move it is going to be against us,’’ said Mansara Mohamed, another protester.

By 10 p.m., someone among the pro-Mubarak demonstrators had fired canisters of tear gas into the crowd of antigovernment demonstrators.

But the protesters flooded back to the barricades, and the battle resumed. A government spokesman ordered the evacuation of the square, but many of the young men declared that they would stay in the square until Mubarak left Egypt or they died as “martyrs.’’

“Hosni Mubarak thinks his chair is more important than the Egyptian people,’’ said Salaan Sirhan, 43, a teacher. “After today they will never forgive his crime.’’

As darkness settled over Cairo, Tahrir Square looked like an army field hospital.