THIS STORY HAS BEEN FORMATTED FOR EASY PRINTING
Across the Region 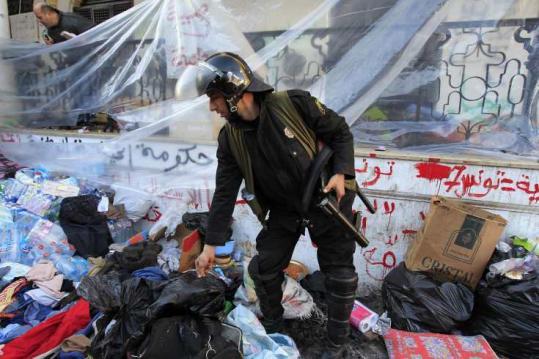 AMMAN, Jordan — Unrest rippling across the Arab world is putting pressure on Jordan’s King Abdullah II, a key US ally who has been making promises of reform in recent days in an apparent attempt to quell domestic discontent over economic degradation and lack of political freedoms.

But his pledges did not satisfy thousands of angry Jordanian opposition protesters who took to the streets again yesterday, pressing demands for the prime minister to step down and the government to halt rising prices, inflation, and unemployment.

More than 3,500 opposition activists from the main Islamist opposition group, trade unions, and leftist organizations gathered in the capital, shouting for the premier’s resignation. Another 2,000 protesters in the northern and western cities of Irbid and Karak made similar calls.

The rallies marked the third consecutive Friday of protests after Muslim prayers inspired by unrest in Tunisia and Egypt.

Prime Minister Samir Rifai announced a $550 million package of new subsidies in the past two weeks for fuel and staple products such as rice, livestock, and liquefied gas for heating and cooking. It also includes a raise for civil servants and an increase in pensions for retired military and civilian personnel.

“We will continue our protests until our demands are met,’’ said Brotherhood spokesman Jamil Abu Bakr, referring to their calls for electing a prime minister and Cabinet officials; amending a controversial election law they claim had reduced votes in their favor; and implementing reforms that would eradicate corruption and introduce a transparent government policy.

Abdullah has been working to create a more open-market economy that would see a greater flow of foreign capital into a resource-barren country, heavily dependent on US and other foreign aid and whose debt is estimated at $15 billion, about double the amount reported three years ago.

“The government buys cars and spends lavishly on its parties and travel, while many Jordanians are jobless or can barely put food on their tables to feed their hungry children,’’ said civil servant Mahmoud Thiabat, 31, a father of three who earns $395 a month.

Such complaints mirror those that ultimately led to the downfall of Tunisia’s president, Zine El Abidine Ben Ali, though as a monarch with deep support from the Bedouin-dominated military, Jordan’s ruler is not seen as vulnerable as Tunisia’s deposed leader.

In Tunis yesterday, police fired tear gas to clear about 1,000 protesters from a square where they have been camped for days, even as many Tunisians welcomed the new interim government that dropped most ministers from the former ruling party.

It was a sign that its concessions may calm down the daily demonstrations that have disrupted life for weeks. In a chaotic scene, police used tear gas to clear the protesters from the front of Prime Minister Mohamed Ghannouchi’s office, and later from Bourguiba Avenue, the capital’s main thoroughfare.

The North African nation was celebrating a full two weeks free of the iron-fisted rule of its longtime strongman.

Ghannouchi’s appointment on Thursday of independents to three key posts in the country’s new interim Cabinet, removing ministers from the former ruling party, was a major concession to the demonstrators.