THIS STORY HAS BEEN FORMATTED FOR EASY PRINTING
Local reaction 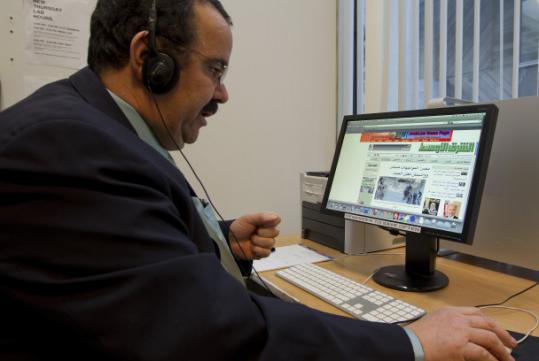 Mohammed Morgan was rapt yesterday as Al Jazeera headlines blared across a large projection screen at the Islamic Society of Boston Cultural Center in Roxbury: “Egyptian protesters defy curfew, with thousands remaining on the streets.’’

The images of violent confrontation worried him; like many of dozens of local Egyptian nationals who watched the broadcast, he has been unable to communicate with friends and family back home.

But mostly what he and the others felt was pride: Their countrymen had finally taken on the fight for freedom. “This has been a wake-up call, and it’s about time,’’ said Morgan, a 37-year-old physician from Braintree, who moved here from Egypt about 11 years ago. “This has been escalating for years and years and years.’’

As thousands of protesters in Egypt took to the streets yesterday to challenge authoritarian President Hosni Mubarak’s 30-year reign, their cries were heard here and around the world.

An estimated 4,000 Egyptians live in Massachusetts, and many of them sat by television screens or surfed In ternet sites, poring over every bit of news coming out of a country whose government had essentially cut off all communication with the outside.

Today, local supporters of the revolt plan to hold their own demonstration from noon to 4 p.m. in Harvard Square, hoping to send a message of solidarity back to their homeland.

“People are getting together, to have the Egyptian voice heard,’’ said Marihan Hashesh of Boston, 23, who is of Egyptian descent.

Hashesh said she lived in Cairo for three years and saw people struggling to provide for their families.

“If Egyptians in Egypt are isolated from the world, we need to be their voice,’’ she said in an e-mail message to organizers.

The protests in Egypt are part of a broader outcry across the Middle East, challenging oppressive governments that have held power for decades. It started in Tunisia, where two weeks ago President Zine El Abidine Ben Ali fled into exile after weeks of protests.

The overthrow of that country’s leaders emboldened demonstrators in Yemen, Jordan, and Algeria, as well as in Egypt.

Egypt’s middle class has been severely squeezed, leaving an economy built around the very well off and the very poor.

“People have been very frustrated, for decades now,’’ said Ashraf Hegazy, who was born in Egypt and is now executive director of the Dubai Initiative at the Belfer Center for Science and International Affairs, at Harvard’s Kennedy School of Government.

Hegazy said the movement in Egypt is fueled by anger at an economy that has left millions without jobs and struggling for necessities, but it also grows out of concerns about corruption within government and in the police force.

Hegazy said that while older generations have become apathetic to the corruption, today’s protests are being led by what he called the “youth bulge,’’ the demographic of 18- to 30-year-olds who make up a significant portion of the country’s population and hold few of the jobs.

According to the US Census Bureau, more than half of Egypt’s 80-million-plus residents are younger than 30. They include professionals such as doctors and engineers.

“All they do is talk about how terrible the situation is,’’ Hegazy said. “That’s why, immediately after Tunisia overthrew its government, you’re starting to see these other protests against Arab countries that are really unprecedented in the older generation.’’

Morgan, in an interview at the Islamic center in Roxbury yesterday, questioned how the United States could have maintained relations for so long with what he called a corrupt government that oppressed its people.

“We have to see America stand for justice with the Egyptian people,’’ he said.

Nassar, an engineer from New Bedford who asked that his full name not be used because he has family in the midst of the turmoil, said that the large-scale demonstrations were evidence of the government’s oppression of the people — and are too big for the government to squelch with armed force and arrests.

Zagloul Ayad, head of Voice of the Arab World Inc., formerly called the Egyptian American Association of New England, sat in his Cambridge office yesterday watching live footage of the protests on his computer, his only way of monitoring the events in his homeland.

He was particularly concerned for a friend who had traveled to Egypt and was supposed to have returned already.

Ayad had hoped for peaceful protests but said he understood the depth of the anger that had been brewing for years.

“Nobody wanted to destroy anything in Egypt, but . . . people are fed up,’’ he said. “The government is ignoring everything.’’

And even as they back the need for revolt, many local Egyptian nationals worry about the uncertain future in Egypt, particularly as no clear leader of the revolt has emerged.

With the military patrolling the cities with tanks, they do not expect large-scale bloodshed. And they hope Mubarak will yield to the revolt and step down.

Hegazy, of the Dubai Initiative, said he expects a new government, with a new Parliament, could be formed in elections later this year.

What he does not expect to see is a return to status quo.

“I don’t think it gets to the point where things go back to where they were a week ago,’’ he said. “There’s just too much anger and too many people have hit the streets to say they’re fed up.’’