Yemenis call for a change; Opposition grows in Egypt 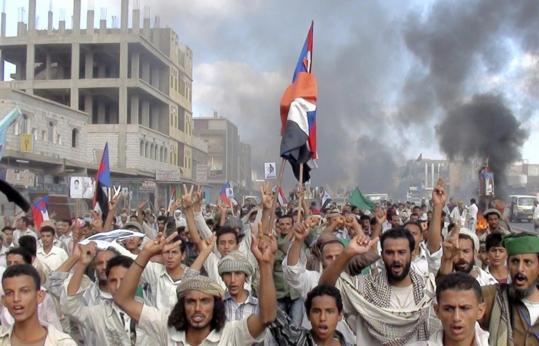 Thousands of protesters took to the streets of Yemen, one of the Middle East’s most impoverished countries, yesterday and secular and Islamist Egyptian opposition leaders vowed to join large protests expected today as calls for change rang across the Arab world.

The Yemeni protests were another moment of tumult in a region whose aging order of US-backed governments appears to be staggering. In a span of just weeks, Tunisia’s government has fallen, Egypt’s appears shaken, and countries such as Jordan and Yemen are bracing against the demands of movements with divergent goals but similar means.

Protests led by young people entered a third day in Egypt, where Mohamed ElBaradei, the Nobel laureate who has become an outspoken opponent of President Hosni Mubarak, returned in hopes of galvanizing the campaign. The Muslim Brotherhood, long Egypt’s largest organized opposition, ended days of official inaction and said it would join the protests today, declaring “a day of rage for the Egyptian nation.’’

ElBaradei called on Mubarak to step down.

“He has served the country for 30 years, and it is about time for him to retire,’’ he told Reuters. “Tomorrow is going to be, I think, a major demonstration all over Egypt and I will be there with them.’’

Although a relative calm settled on Cairo, smoke rose over the city of Suez, as sometimes violent protests continued there.

In Yemen, organizers vowed to continue demonstrations today and for weeks to come until the 32-year-old US-backed government of Ali Abdullah Saleh either fell or consented to changes.

At least visually, the scenes broadcast across the region from Yemen were reminiscent of the events in Egypt and the month of demonstrations that brought down the government in Tunisia. But as they climaxed by midday, they appeared to be carefully organized and mostly peaceful, save for some arrests. Pink — be it in the form of headbands, sashes, or banners — was the dominant color; organizers described it as the symbol of the day’s protests.

“To Jiddah, oh Ali!’’ some shouted, in reference to the Saudi Arabian city where Tunisia’s president fled this month. “The people’s demand is the fall of the government!’’

Unlike in Egypt, the peaceful protests in Yemen were not led by young people but by the traditional opposition, largely Islamists. And the opposition remained divided over whether to topple the Saleh government or simply push for changes.

But the potential for strife in the country is difficult to overstate. Yemen is troubled by a rebellion in the north and a struggle for secession in the once independent, Marxist south. In recent years, an affiliate of Al Qaeda has turned parts of the country, a rugged, often lawless region on the southwestern corner of the Arabian Peninsula, into a refuge beyond the state’s reach.

Added to the mix is a remarkably high proportion of armed citizens, some of whom treat Kalashnikov assault rifles as a fashion accessory.

“The opposition is afraid of what would happen if the regime falls,’’ said Khaled Alanesi, who also works with the human rights group in Sana, Yemen’s capital. “Afraid of the militant groups, Al Qaeda, the tribes and all the arms here.’’

The government responded to the protests by sending a large number of security forces into the streets, said Nasser Arrabyee, a Yemeni journalist in Sana.

But the government suggested that it had not deployed large numbers of security forces, keeping them peaceful.

“The Government of the Republic of Yemen strongly respects the democratic right for a peaceful assembly,’’ Mohammed al-Basha, a spokesman for the Yemeni Embassy in Washington, said in a statement. “We are pleased to announce that no major clashes or arrests occurred, and police presence was minimal.’’

The protests sprang from political divisions that began building in the country in October, when a dialogue collapsed between the opposition and Saleh, a 64-year-old strongman who has ruled his fractured country for more than three decades and is a crucial US ally in the fight against the Yemeni branch of Al Qaeda. Although Saleh’s term is supposed to end in 2013, proposed amendments to the Constitution could allow him to remain in power for two additional terms of 10 years.