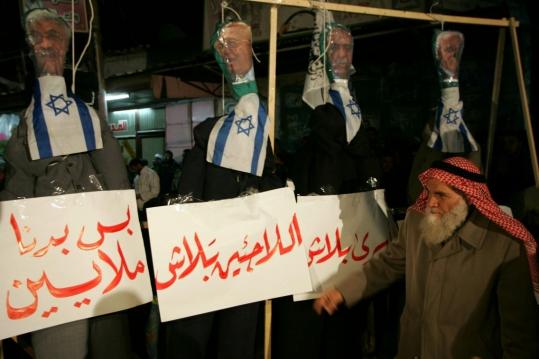 GAZA CITY, Gaza Strip — Thousands of cheering Hamas supporters in Gaza burned effigies yesterday of Palestinian President Mahmoud Abbas and his senior aides in the rival Palestinian leadership in the West Bank, denouncing them as traitors.

The protests were a response to reports by Al-Jazeera satellite TV about leaked documents from a decade of Israeli-Palestinian negotiations. Al-Jazeera, which has been releasing the documents gradually this week, says they show that Abbas made far-reaching concessions on Jerusalem and the fate of Palestinian refugees.

Two-thirds of Gaza’s 1.5 million people are refugees from the 1948-49 war that followed Israel’s creation, or descendants of those refugees.

A coffin draped with the photos of Abbas, Prime Minister Salam Fayyad, and chief negotiator Saeb Erekat also went up in flames during the march in the southern town of Rafah in Hamas-ruled Gaza.

Abbas has said he has been the victim of a smear campaign and Al-Jazeera is distorting his positions. The Islamic militant group Hamas has seized the opportunity to drive home allegations that he has no mandate from the Palestinian people to make concessions.

Abbas’s term expired a year ago, but he has not scheduled elections because Hamas is in control of Gaza and has said it would not cooperate. Also, Hamas won the last parliamentary elections in 2006, but Abbas dismissed the Hamas-led government after Hamas overran Gaza.

Yesterday, several thousand marched in Rafah and the nearby town of Khan Younis.

In the Rafah march, Atallah Abu al-Suboh, a local Hamas leader, spoke to the crowd before the effigies, draped with Israeli flags, and the coffin were set ablaze. “Those gangs,’’ he said, pointing to the coffin, “are not representing the Palestinian people.’’

Hamas and Abbas have been bitter rivals since the Islamic militants wrested Gaza from the Palestinian president by force in 2007. Yesterday’s spectacle and tough language marked one of the harshest public assaults on Abbas by his rivals yet.

Before the marches, Erekat accused Al-Jazeera of incitement and putting his life at risk. Many of the leaked documents feature Erekat.

“If you see Al-Jazeera, the style is telling people, ‘Saeb is guilty, execute him, and then after you execute him, give him an unfair trial,’ ’’ he said.

Erekat said he has not received death threats but is concerned nonetheless. ’

Al-Jazeera has not commented on his accusations.

Some Palestinian officials have said they believe the documents were leaked by someone linked to the Negotiations Support Unit, a department that provides technical and research support and is headed by Erekat.