As US moves out of Iraq, Iranian business moves in 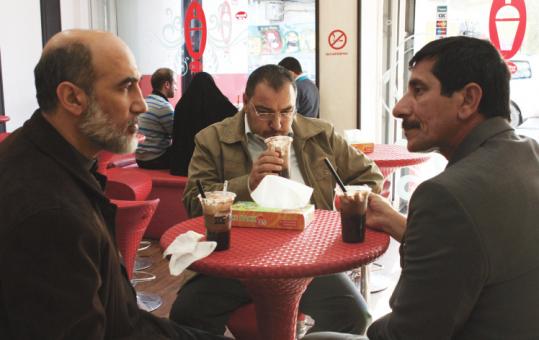 Ice Pack, an Iranian ice cream franchise, has a shop in Baghdad and will soon open another in the Green Zone, near the US Embassy. The franchise proclaims its intent to challenge US fast-food hegemony worldwide. (Liz Sly/ Washington Post)
By Liz Sly Washington Post / December 25, 2010

BAGHDAD — In the heart of Baghdad’s Green Zone, just yards from the mighty fortress of the biggest US Embassy in the world, a small but symbolic challenge to America’s rapidly waning influence in Iraq is taking shape in the form of an Iranian ice cream parlor.

The building is under construction, but when complete, it will offer customers a choice of 34 ice cream flavors, along with a front-row view of the comings and goings of the heavily armored convoys that whisk US officials through the blast walls protecting the embassy nearby.

Next door is the fast-fading Freedom Restaurant, named in honor of the US-led invasion and aimed at US soldiers and contractors. These days, American customers are rare, and the restaurant mostly caters to Iraqi government workers who come to eat chicken and kebabs on plastic tablecloths under flickering neon lights.

It’s a vivid reminder of the shifting balance of power here as the US military winds down its presence and prepares to go home. Even the Green Zone, once an outpost of Americana in a chaotic Iraq, is no longer a US zone of influence. The United States handed over control to Iraqi security forces last June, along with responsibility for issuing the coveted badges that allow access to the walled enclave, relinquishing the ability to control who may come and go.

In the long-deadlocked process of government formation, it was Iran, not America, that brokered the deal that enabled Prime Minister Nouri al-Maliki to keep his job, by exerting pressure on anti-US cleric Moqtada al-Sadr to accept Maliki for a second term, leaving both men beholden to their powerful neighbor.

Simply by being next door, Iran wields leverage in Iraq that the United States cannot hope to enjoy. Hundreds of thousands of Iranians visit Iraq’s holy Shi’ite shrines every year, Iranian goods flow freely across the border, and Iraqi politicians are acutely aware that they will have to continue dealing with Iran long after US troops have gone home.

Meanwhile, as Ice Pack expands across Iraq, there are no plans to open Baghdad branches of , Burger King, or any other US brand names.

Haideri, 22, and his business associate, Hadi Laith, 23, who owns the Ice Pack franchise for Iraq, said they would have preferred an American partner.

“We wanted to open a McDonald’s here, but we were afraid someone would blow it up,’’ Haideri said over large paper cups filled with chocolate ice cream, fruit, and whipped cream, Ice Pack’s specialty, at the chain’s first Baghdad outlet in the busy Karradah neighborhood.

“A lot of Iraqis want to try new products, and McDonald’s is really enthusiastic to come here because they know if they come they will make a fortune. But Iraqis are too scared.’’

“Iran is easy,’’ added Laith, who bought the Ice Pack franchise in 2008 for $800,000. “Transportation is easy. Customs are easy. McDonald’s had very exacting demands, and they wanted $4 million.’’

In some ways, Ice Pack’s push into the Green Zone is more of a snub than a challenge. Iranian-made ice cream is a lesser threat to US officials than the Iranian-made rockets, fired by Iranian-trained and funded militias, that periodically crash into the embassy and its environs.

Haideri says he did not deliberately site the outlet near the embassy, and indeed seems somewhat anxious about the store’s proximity to rockets aimed at Americans. He is hoping to attract Iraqi families living in the zone, and does not expect US diplomats to visit.

Yet there’s something brazen about the Green Zone location of a franchise whose website declares that its goal is “to exalt the name of Iran and reinforce Iranian identity.’’

Citing McDonald’s, Starbucks, and Burger King as its competitors and inspiration, Ice Pack’s website adds, in English: “Considering the fact that countries such as the United States have been able to impose their exports to other countries by chain and brand systems but Iran has not ever used this method, happily Ice Pack has been able to include Iran in competition with the world’s chain brands.’’