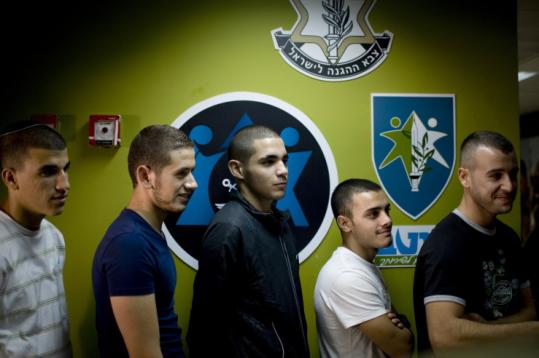 TEL HASHOMER, Israel — Since Israel’s founding, the military has served not just as a defender against outside threats, but as the glue that brings together a patchwork nation of immigrants.

Now, the Israel Defense Forces’ position as the country’s most venerated institution appears to be slipping. While service is compulsory for most young men and women, a growing minority is avoiding conscription, leaving planners to worry that the military will not have the troops it says it needs.

The characteristics of those who do serve are changing in striking ways. Officers who are ideologically opposed to relinquishing Israeli control of the West Bank are taking on a more prominent role, potentially complicating any eventual Israeli withdrawal of Jewish settlers from the territory as part of a peace deal with the Palestinians.

Recent scandals have reignited debate about morals and accountability in the armed forces, and analysts say public trust in the military is declining. Last month, a YouTube video of a dancing Israeli soldier near a bound and blindfolded Palestinian woman went viral on the Internet, further embarrassing the military.

The share of military-age Jewish Israelis who do not serve grew from 12.1 percent in 1980 to 26 percent in 2007, according to a study by Haifa University political scientists published in August. The military predicts that figure will increase to 43 percent by 2020. And the share of 11th- and 12th-grade males who said they would volunteer if service was not mandatory was only 58 percent in 2007, compared with 94 percent in 1988, the study found.

“Fifteen or 20 years ago, not serving in the army or not doing miluim [reserve duty] was something to be ashamed of. Today, I wouldn’t say it’s the other way around, but definitely people have no problem to declare that they just don’t go to the army or don’t serve in the reserve duty,’’ said Shahaf Kieselstein, 40, a reservist who handles combat unit recruitment.

Youth icons who have avoided service in recent years, such as Leonardo DiCaprio’s girlfriend, model Bar Refaeli, give legitimacy to evading service, he said. “It trickles down.’’

The biggest explanation for the declining service rate is the growing number of ultra-Orthodox Jews, who study full time in yeshivas, or religious schools, and are eligible for exemptions from military service. Others are exempted for health reasons, criminal records, or foreign residence.

To help persuade more ultra-Orthodox to volunteer, the Israeli military is expanding its efforts to provide special food, extra time for prayer, and other adjustments to make service compatible with their religious practices.

The Israeli military says its monitoring of Facebook has helped catch 1,000 women lying about their religious background to avoid serving.

The army hired investigators two years ago to help stem the increase of draft dodgers and has used Facebook to find evidence of those women lying to avoid conscription.

A military official said recently that one woman who said she was a religious Jew posted a photo of herself on Facebook holding a menu from a non-kosher restaurant. Another updated her profile on the Sabbath.

All were brought back to duty.

In the past, officers largely came from secular, elite families from the Tel Aviv area or the collective farms known as kibbutzim. But today, increasing numbers are observant Jews who tend to be more politically oriented, more committed to the Zionist cause, and more integrated into society than the ultra-Orthodox.

An Israeli military magazine, Ma’arachot, reported recently that one-third of those who complete officers’ courses come from this group, a roughly tenfold increase over a decade ago.

The military says it still fills its combat unit quotas, but officials contend they do not have enough soldiers for support units and administrative jobs.

“Right now we have a problem because we lack soldiers,’’ said Brigadier General Amir Rogovski, head of personnel planning in the military’s manpower branch. “When you see the forecast for 2020, it’s going to be worse.’’