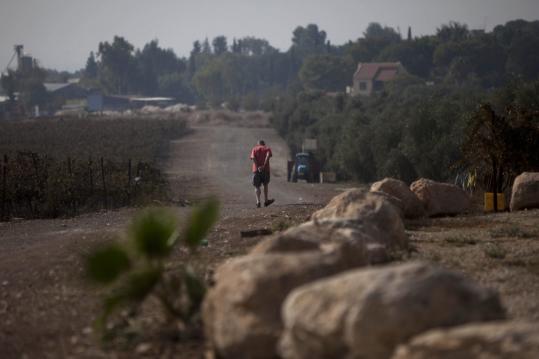 A man walked near fields at Kibbutz Hulda in central Israel. The kibbutz has seen its membership plunge to about 110 people, half the number at its peak in the early 1980s. (Oded Balilty/Associated Press)
By Amy Teibel Associated Press / November 21, 2010

KIBBUTZ HULDA, Israel — The austere communal farms that were long Israel’s best-known symbol are marking their 100th anniversary with their socialist ideology in tatters, their populations small and aging. In search of revival, the kibbutz movement has embraced decidedly capitalist ways.

Kibbutzim have turned to private ownership and deals with Western businesses, as well as drawing in urbanites looking to build homes where wheat once swayed and cows roamed. With the reinvention, membership is perking up, from both new blood and former members who fled the confines of communal living but are starting to come back.

Kibbutz Hulda, in central Israel, is a telling example.

The kibbutz, which is remembered as a staging ground for Jewish convoys trying to break the Arab siege on Jerusalem during the fighting around Israel’s 1948 creation, has seen its membership plunge to about 110 people, from twice that at its peak in the early 1980s. That was when the kibbutz movement as a whole began to be pummeled by economic crisis and the lure of greater freedom outside.

Like many other kibbutzim, Hulda has shut down its communal dining hall. In a major inversion of the movement’s key principle — equality — Hulda members no longer receive equal allowances but are paid according to the type of work they do, with managers making more than general workers. The kibbutz, which was once home to author Amos Oz, supports itself largely through members’ salaries from outside jobs, agriculture, and by leasing land and buildings to outsiders.

And like nearly three dozen other kibbutzim, it’s building a new neighborhood for nonmembers who want to enjoy the benefits of rural life without having to share the kibbutz’s founding values.

Still under construction, the 110 homes have already been sold, said project manager Itzik Gedalia. The homes will average 1,750 square feet — about twice as big as the average kibbutznik’s and significantly larger than most Israelis’ apartments. Residents will own these homes, unlike the kibbutzniks, who reject the idea of private property.

“When no one wanted to look at us, it looked like the only way to keep Hulda alive,’’ said Amotz Peleg, who was born there 67 years ago. “You can’t keep a community alive with 100 members and a few tenants. You can’t support a clinic, nursery schools, a grocery.’’

Because the state owns the land on which the kibbutzim stand, the communal farms don’t get a cut from the house sales. Still, Hulda hopes the infusion of new families will help keep communal institutions like the local school, clinic, and grocery alive, because nonmembers pay to use them, Peleg said.

The loosening of the original kibbutz framework has also drawn back some former kibbutzniks who left their homes looking for greater freedom, and they’re now returning as members. Peleg’s daughter, Galia Peleg, is one of them.

“As soon as Hulda privatized, that was the thing that made me go back,’’ she said. “I understood I could preserve my quality of life materially and benefit from the community life as well.’’ Her brother is also in the process of becoming a member.

According to movement officials, the total kibbutz population today is close to 127,000, up from 115,300 five years ago — about 1.6 percent of Israel’s population. About 4,000 are not members. At the movement’s height, about 3.5 percent of Israelis were kibbutzniks.

Today there are about 270 kibbutzim across the country, and they still hold economic weight. Their factories and farms produce 9 percent of Israel’s overall industrial output, worth $8 billion, and 40 percent of its agricultural output, worth more than $1.7 billion.

The brainchild of eastern European socialist Zionists, the kibbutz quickly became a symbol of the pioneering and socialist ethos of the country’s early years. The first one was Degania, founded on the banks of the Sea of Galilee in October 1910.

Kibbutzniks built many of the settlements that defined and defended the country’s early borders. Many of Israel’s early political, military, and business leaders came from kibbutzim.

The movement was unique in the annals of socialism because no other voluntary form of collectivism attracted so many devotees. Their socialist and Zionist ideology was based on the principle of shared agrarian labor, shared income, shared meals, and shared housing for children. Even individual life decisions — like a choice for university studies — could be subject to a vote.